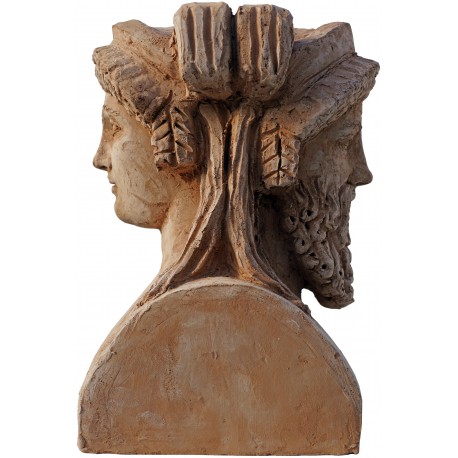 Free academic copy of the statue from the first half of the 2nd century AD Today preserved in the Gallery of Geographical Maps of the Vatican Museums. This artifact is "hand carved" does not come from a mold.

The myth of Bacchus and Ariadne:
Abandonment, despair and new love. Universal feelings for a timeless myth: Bacchus and Ariadne
Abandonment, despair and new love. These are the very topical themes that act as a leitmotiv to one of the most romantic mythological stories, the one between the god Dionysus, called by the Romans Bacchus, and the sweet Ariadne, daughter of the king of Crete, Minos.
Arianna had helped the young Athenian Theseus to defeat the terrible Minotaur, the mythological being with a man's body and a bull's head, and had managed to get him out of the labyrinth where the beast was hiding, advising him to use a ball to unroll along the its path, to then easily find its way. The young princess, in love with Theseus, had only helped him after making her promise that he would marry her. The Athenian hero had assured her that he would keep his promise and on his return to Athens he took her with him. Once in Naxos, however, she took advantage of a moment when she fell asleep on the beach, to abandon her.
Bacchus and Ariadne Taken from desperation Ariadne began to wander around the island, but immediately realized that she was alone. The moon, now high in the sky, illuminated the sea and the sad girl saw the sails of Theseus's boat go away at great speed. Despair, at this point, was total. Ariadne began to cry relentlessly and her sweet and sad lament reached the ears of the god of wine, Bacchus. Arriving on the island to console the girl, he was so fascinated by her beauty that he decided to take her as a wife.
The girl accepted the proposal of Dionysus, who came so lovingly to his aid. The latter also took the crown worn by the girl and threw it into the sky forming a constellation, the so-called Boreal Crown, or a small constellation of the northern hemisphere, whose main stars form a semicircular arc. Instead of the princess crown, Bacchus gave Ariadne a diadem of stars with which the girl, from that moment on, lived among the Olympian gods.