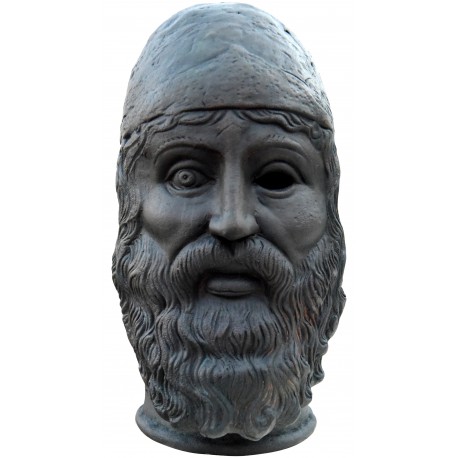 The Riace bronzes (Italian Bronzi di Riace [ˈbrondzi di riˈaːtʃe]), also called the Riace Warriors, are two full-size Greek bronzes of naked bearded warriors, cast about 460–450 BC that were found in the sea near Riace in 1972. The bronzes are currently located at the Museo Nazionale della Magna Grecia in the southern Italian city of Reggio Calabria, Italy.
They are two of the few surviving full-size ancient Greek bronzes (which were usually melted down in later times), and as such demonstrate the superb technical craftsmanship and exquisite artistic features that were achieved at this time.
The bronzes are on display inside a microclimate room on top of an anti-seismic Carrara marbled platform. Along with the bronzes, the room also contains two head sculptures: “la Testa del Filosofo” and “la Testa di Basilea”, which are also from the 5th century BC.
Although the bronzes were rediscovered in 1972, they did not emerge from conservation until 1981. Their public display in Florence and Rome was the cultural event of that year in Italy, providing the cover story for numerous magazines. Now considered one of the symbols of Calabria, the bronzes were commemorated by a pair of Italian postage stamps and have also been widely reproduced.
The two bronze sculptures are simply known as “Statue A”, referring to the one portraying a younger warrior, and “Statue B”, indicating the more mature-looking of the two. Statue A is 203 centimetres tall while Statue B stands 196.5 centimetres tall.