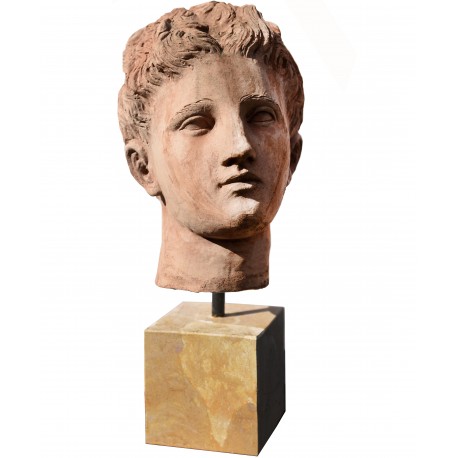 Apollo's terracotta head, Roman copy from the original Greek of the 4th century b.C.
Our form was derived from an ancient chalk, plaster cast, replica of the famous head of the Capitoline Museums.
Albani collection - Inventory 5973 / S 286 (see photos).
The head is supplied with an Italian marble museum base hand made by us.

Apollo is one of the most important and complex of the Olympian deities in classical Greek and Roman religion and Greek and Roman mythology. The ideal of the kouros (a beardless, athletic youth), Apollo has been variously recognized as a god of music, truth and prophecy, healing, the sun and light, plague, poetry, and more. Apollo is the son of Zeus and Leto, and has a twin sister, the chaste huntress Artemis. Apollo is known in Greek-influenced Etruscan mythology as Apulu.
As the patron of Delphi (Pythian Apollo), Apollo was an oracular god—the prophetic deity of the Delphic Oracle. Medicine and healing are associated with Apollo, whether through the god himself or mediated through his son Asclepius, yet Apollo was also seen as a god who could bring ill-health and deadly plague. Amongst the god's custodial charges, Apollo became associated with dominion over colonists, and as the patron defender of herds and flocks. As the leader of the Muses (Apollon Musegetes) and director of their choir, Apollo functioned as the patron god of music and poetry. Hermes created the lyre for him, and the instrument became a common attribute of Apollo. Hymns sung to Apollo were called paeans.
In Hellenistic times, especially during the 3rd century BCE, as Apollo Helios he became identified among Greeks with Helios, Titan god of the sun, and his sister Artemis similarly equated with Selene, Titan goddess of the moon. In Latin texts, on the other hand, Joseph Fontenrose declared himself unable to find any conflation of Apollo with Sol among the Augustan poets of the 1st century, not even in the conjurations of Aeneas and Latinus in Aeneid XII (161–215). Apollo and Helios/Sol remained separate beings in literary and mythological texts until the 3rd century CE.