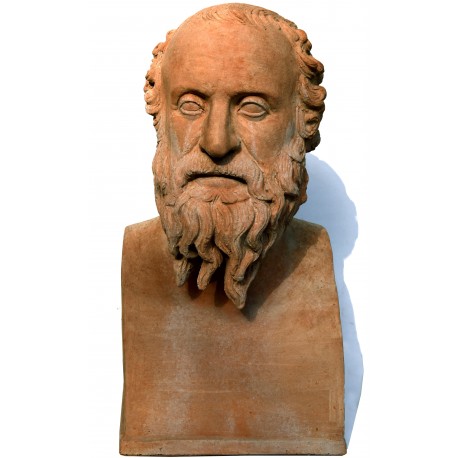 Diogenes was a Greek philosopher and one of the founders of Cynic philosophy. Also known as Diogenes the Cynic, he was born in Sinope (modern-day Sinop, Turkey), an Ionian colony on the Black Sea, in 412 or 404 BC and died at Corinth in 323 BC.
Diogenes was a controversial figure. His father minted coins for a living, and when Diogenes took to debasement of currency, he was banished from Sinope. After being exiled, he moved to Athens and criticized many cultural conventions of the city. Diogenes modelled himself on the example of Heracles. He believed that virtue was better revealed in action than in theory. He used his simple lifestyle and behaviour to criticize the social values and institutions of what he saw as a corrupt or at least confused society. In a highly non-traditional fashion, he had a reputation of sleeping and eating wherever he chose and took to toughening himself against nature. He declared himself a cosmopolitan and a citizen of the world rather than claiming allegiance to just one place. There are many tales about him dogging Antisthenes' footsteps and becoming his "faithful hound". Diogenes made a virtue of poverty. He begged for a living and often slept in a large ceramic jar in the marketplace. He became notorious for his philosophical stunts such as carrying a lamp in the daytime, claiming to be looking for an honest man. He criticized and embarrassed Plato, disputed his interpretation of Socrates and sabotaged his lectures, sometimes distracting attendees by bringing food and eating during the discussions. Diogenes was also noted for having publicly mocked Alexander the Great.
After being captured by pirates and sold into slavery, Diogenes eventually settled in Corinth. There he passed his philosophy of Cynicism to Crates, who taught it to Zeno of Citium, who fashioned it into the school of Stoicism, one of the most enduring schools of Greek philosophy. None of Diogenes' many writings have survived, but details of his life come in the form of anecdotes (chreia), especially from Diogenes Laërtius, in his book Lives and Opinions of Eminent Philosophers. All that is available are a number of anecdotes concerning his life and sayings attributed to him in a number of scattered classical sources.