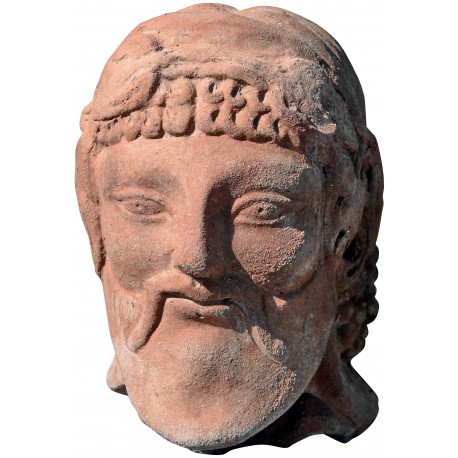 Etruscan head of Fufluns, corresponds to the Greek god Dionysus and the Roman god Bacchus.
Reproduction 1: 1 of the head of the only surviving representation of the god Fufluns, bronze statue of 480 BC preserved at the Estense Galleries of Modena.
Terracotta of our production.

Article taken from Archeo number 8, August 2009 by Daniele F. Maras, "Fufluns, the wine and the mysteries"
There are many depictions of Fufluns from the archaic period to the recent one, which show how the Etruscan god had been assimilated in every way to the Dionysus of the Greeks, to the point of inheriting its iconography and mythology.
Together with the fruit of the vine, the image and celebrations of the god Dionysus arrive in Italy from Greece, who, in his new Etruscan identity, welcomes the memory of an ancient Italic root, linked to the plant world and the cult of fertility . In the figurative imagery of the Etruscans the appearance of Dionysus is rather early, whose iconography was accepted by the Greek world hand in hand with the importation and imitation of the decorated pottery on which the image of the god was often depicted. This rapid reception derives from the close connection of the divinity with the consumption of wine, which from Greece arrives in Etruria, with all the ceremonial and social value of the symposium, laden with religious aspects placed under the protection of Dionysus and his circle. The name of the Etruscan god, however, is not attested before the fifth century BC when the votive inscriptions mentioning it certify the strict identification of the local Fufluns with the Greek Dionysus. It is not easy to reconstruct the most ancient phases of the cult of divinity and its acceptance in the Etruscan pantheon. In the name Fufluns we recognize a form of Italic derivation, probably Umbrian-Sabine, which in origin was to designate a god of vegetation * Foflo-nos, from the same base of flora and flos, the flower. The only evidence of the original connection of the god with the Italic world comes from an engraved mirror, from Orvieto, in which Fufluns is placed in close association with Vesuna, a great Umbrian goddess of fertility. The logical transition from a fundamentally agricultural divinity to the god of vine and wine is easily understood. The oldest Etruscan mention of Fufluns in a votive context comes from the sanctuary of the southern area of ​​Pyrgi [the port of Caere, whose remains are in the area of ​​the Castle of Santa Severa]. An inscription under the foot of an attic crater from the early decades of the 5th century BC reads: mi fuflunusra, or "I (am) the Dionysian". In the funerary iconography, some symbolic elements such as the kantharos, the fawn or the scroll [sheet of rolled parchment with written indications for the initiate] demonstrate the widespread diffusion of the Dionysian mysteries among the Etruscan population at least from the end of the sixth century until the late Hellenism, a period in which the Dionysian mysteries began to be harshly repressed by Rome to avert the spread of associations of initiates who, spreading from Etruria and Campania, risked corrupting young people with destabilizing effects for the State.