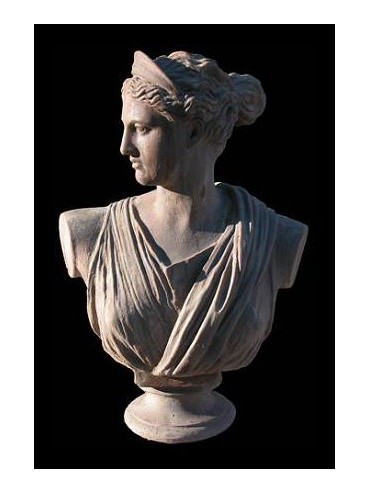 Our production in terracotta with patina.
Hunting goddess, copy of the roman statue in Louvre, "Diana of Versailles".
Roman copy, I - II centuri AD, from an original attributed to athenian sculptor Leochares (VI century BC).

The Diana of Versailles is a slightly over lifesize marble statue of the Greek goddess Artemis (Latin: Diana), with a deer, located in the Musée du Louvre, Paris. It is a Roman copy (1st or 2nd century AD) of a lost Greek bronze original attributed to Leochares, c. 325 BC.
The statue is also known as Diana à la Biche, Diane Chasseresse ("Diana Huntress"), Artemis of the Chase, and Artemis with the Hind.
The statue was discovered in Italy: the Louvre website suggests Nemi, where there was an ancient sanctuary; other sources[citation needed] posit Hadrian's Villa at Tivoli; in 1556[2] it was given by Pope Paul IV to Henry II of France, with a subtle but inescapable allusion to the king's mistress, Diane de Poitiers. It was installed as the central feature of the Jardin de la Reine laid out west of the Galerie des Cerfs at Fontainebleau; there it was the most prominently displayed and among the first Roman sculptures to be seen in France. "Alone amongst the statues exported from Italy before the second half of the seventeenth century the Diane Chasseresse acquired a reputation outside Italy equivalent to the masterpieces in the Belvedere or the Villa Borghese", though its admirers generally confused it with the Artemis of Ephesus. In 1602 Henri IV removed it to the Palais du Louvre, where the Diana was installed in a specially designed gallery to receive it, the Salle des Antiques (now the Salle des Caryatides. At the time its restorations were revised by Barthélemy Prieur. Replacing it at Fontainebleau was Prieur's bronze replica cast from it in 1605 (Haskell and Penny 1981:196), which was set upon a high Mannerist marble pedestal arranged by the hydraulics engineer Tommaso Francini, with bronze hunting dogs and stag's heads spitting water by Pierre Briard, 1603, in a parterre surrounded by an orangery. Another full-size bronze replica was made in 1634 by Hubert Le Sueur for Charles I of England, the brother-in-law of Louis XIII.
The Diana was installed in the Grande Galerie (Hall of Mirrors) of Versailles by Louis XIV. For Marly a marble copy was executed by Guillaume Coustou in 1710.
As one of France's greatest treasures, the Diane Chasseresse returned to the Louvre in An VI of the First Republic (1798). It was restored once more, in 1802, by Bernard Lange.
Diana is represented as a slender and masculine huntress, attended by a smaller than life buck (male deer) in vibrancy of life. She looks toward the right, perhaps towards the very deer, as with raised right arm she draws an arrow from the quiver. Her left hand can be seen to be holding the part of a bow, the remainder missing, in position for striking; the missing bow transforming the image into a simple pastoral one from one symbolic of huntress and prey. She wears a short Dorian chiton, a himation around her waist, and sandals.
Comparable Roman replicas of the same model, noted by the Louvre's website, have been found at Leptis Magna (Libya) and at Antalya (Turkey).
A miniature replica of the statue stood on the fireplace mantle in the Titanic's first class lounge. In 1986, Robert Ballard discovered and photographed the statue on the sea floor near the bow section of the wreck.
Source: Wikipedia

Artemis (/ˈɑːrtᵻmᵻs/; Ancient Greek: Ἄρτεμις, Modern Greek: Άρτεμις, Ártemis, Attic Greek: [ár.te.mis]) was one of the most widely venerated of the Ancient Greek deities. Her Roman equivalent is Diana. Some scholars believe that the name, and indeed the goddess herself, was originally pre-Greek. Homer refers to her as Artemis Agrotera, Potnia Theron: "Artemis of the wildland, Mistress of Animals".
The Arcadians believed she was the daughter of Demeter.
In the classical period of Greek mythology, Artemis was often described as the daughter of Zeus and Leto, and the twin sister of Apollo. She was the Hellenic goddess of the hunt, wild animals, wilderness, childbirth, virginity and protector of young girls, bringing and relieving disease in women; she often was depicted as a huntress carrying a bow and arrows. The deer and the cypress were sacred to her. In later Hellenistic times, she even assumed the ancient role of Eileithyia in aiding childbirth.
Source: Wikipedia

26 other products in the same category: