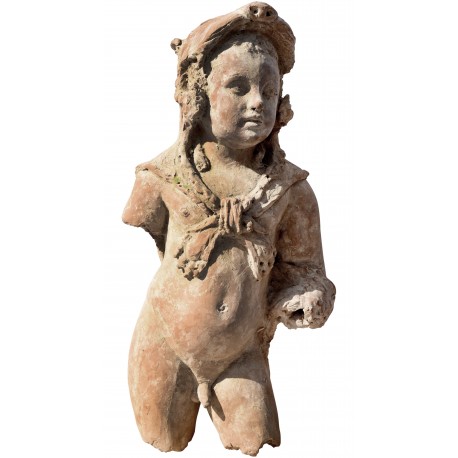 Reproduction of the famous "young Hercules" located in the Vatican Museums.
Our terracotta copy is supplied with a white Carrara marble and iron museum base.

Hercules is a Roman hero and god. He was the equivalent of the Greek divine hero Heracles, who was the son of Zeus (Roman equivalent Jupiter) and the mortal Alcmene. In classical mythology, Hercules is famous for his strength and for his numerous far-ranging adventures.

The Romans adapted the Greek hero's iconography and myths for their literature and art under the name Hercules. In later Western art and literature and in popular culture, Hercules is more commonly used than Heracles as the name of the hero. Hercules was a multifaceted figure with contradictory characteristics, which enabled later artists and writers to pick and choose how to represent him. This article provides an introduction to representations of Hercules in the later tradition.

The Latin name Hercules was borrowed through Etruscan, where it is represented variously as Heracle, Hercle, and other forms. Hercules was a favorite subject for Etruscan art, and appears often on bronze mirrors. The Etruscan form Herceler derives from the Greek Heracles via syncope. A mild oath invoking Hercules (Hercule! or Mehercle!) was a common interjection in Classical Latin.

Hercules had a number of myths that were distinctly Roman. One of these is Hercules' defeat of Cacus, who was terrorizing the countryside of Rome. The hero was associated with the Aventine Hill through his son Aventinus. Mark Antony considered him a personal patron god, as did the emperor Commodus. Hercules received various forms of religious veneration, including as a deity concerned with children and childbirth, in part because of myths about his precocious infancy, and in part because he fathered countless children. Roman brides wore a special belt tied with the "knot of Hercules", which was supposed to be hard to untie. The comic playwright Plautus presents the myth of Hercules' conception as a sex comedy in his play Amphitryon; Seneca wrote the tragedy Hercules Furens about his bout with madness. During the Roman Imperial era, Hercules was worshipped locally from Hispania through Gaul.