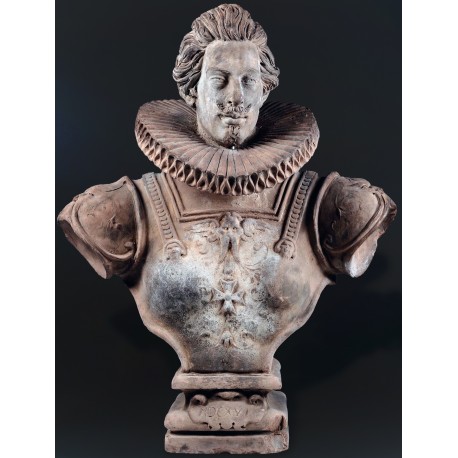 Bust of Cosimo II of the Medici in terracotta.
This is the bust from which we took the mold for the Cosimo of our production.
Bust of the early 1900s, beautiful.

Cosimo II de' Medici (12 May 1590 – 28 February 1621) was Grand Duke of Tuscany from 1609 until 1621. He was the elder son of the then incumbent Grand Duke and Christina of Lorraine. He married Maria Magdalena of Austria, and had eight children.
For the majority of his eleven-year reign, he delegated the administration of Tuscany to his ministers. He is best remembered as the patron of Galileo Galilei, his childhood tutor. He died of tuberculosis in 1621.
Cosimo de' Medici was the elder son of Ferdinando I de' Medici, Grand Duke of Tuscany, and Christina of Lorraine. His father requisitioned a modern education for him: Galileo Galilei was Cosimo's tutor between 1605 and 1608. Ferdinando arranged for him to marry Archduchess Maria Maddalena of Austria, daughter of Archduke Charles II, in 1608. Together they had eight children, among whom was Cosimo's eventual successor, an Archduchess of Inner Austria, a Duchess of Parma and two cardinals.
Ferdinando I died in 1609. Due to his precarious health, Cosimo did not actively participate in governing his realm. Just over a year after Cosimo's accession, Galileo dedicated his Sidereus Nuncius, an account of his telescopic discoveries, to the Grand Duke.[2] Additionally, Galileo christened the moons of Jupiter the "Medicean stars". Galileo's advocacy of Copernicanism later led to his trial by the Roman Inquisition, and he was held under house arrest in Tuscany from 1633 until his death in 1642.
The Grand Duke assiduously enlarged the navy. He died on 28 February 1621 from tuberculosis. He was succeeded by his elder son, Ferdinando. The child-Grand Duke's regency was bestowed upon Cosimo II's wife and mother, as per his wishes