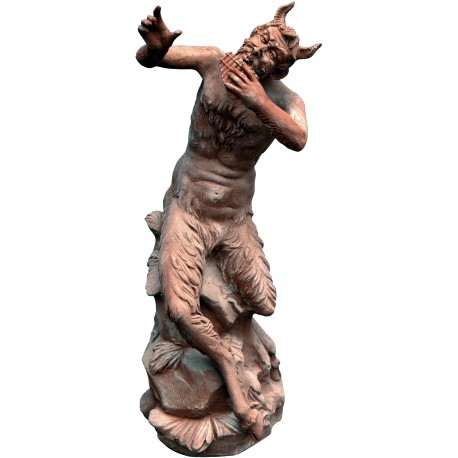 Hand made in Italy (Tuscany)

In Greek religion and mythology, Pan is the god of the wild, shepherds and flocks, nature of mountain wilds and rustic music, and companion of the nymphs. He has the hindquarters, legs, and horns of a goat, in the same manner as a faun or satyr. With his homeland in rustic Arcadia, he is also recognized as the god of fields, groves, and wooded glens; because of this, Pan is connected to fertility and the season of spring. The ancient Greeks also considered Pan to be the god of theatrical criticism and impromptus. The word "panic" is a tribute to the god.

In Roman religion and myth, Pan's counterpart was Faunus, a nature god who was the father of Bona Dea, sometimes identified as Fauna; he was also closely associated with Sylvanus, due to their similar relationships with woodlands. In the 18th and 19th centuries, Pan became a significant figure in the Romantic movement of western Europe and also in the 20th-century Neopagan movement.

Many modern scholars consider Pan to be derived from the reconstructed Proto-Indo-European god, whom these scholars believe to have been an important pastoral deity. The Hindu god Pushan is believed to be a cognate of Pan. The connection between Pan and Pushan was first identified in 1924 by the German scholar Hermann Collitz. According to Edwin L. Brown, the name Pan is probably a cognate with the Greek word ὀπάων "companion".

In his earliest appearance in literature, Pindar's Pythian Ode iii. 78, Pan is associated with a mother goddess, perhaps Rhea or Cybele; Pindar refers to maidens worshipping Cybele and Pan near the poet's house in Boeotia

The satyr, in ancient Greek: σάτυρος, sátyros, is a mythical male figure inhabiting woods and mountains. Minor deity, personification of fertility and life force of nature, connected with Dionysian worship. In ancient Roman religion it is known as "faun".