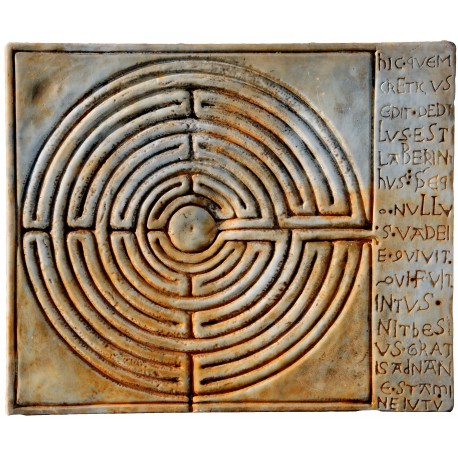 Hand made.
Our reproduction 1:1

english language:
this is the labyrinth built by dedalus of creta: everyone wo entered couldent come out but teseo thanks to arianna and her BALL OF THREAD

The same Labirint in CHARTRES

The Chartres Labyrinth:The Chartres labyrinth is found in the Cathedral of Notre Dame in Chartres about 80 km south west of Paris, France.  It was installed in the cathedral around 1205 AD.  It is circular in shape with eleven circuits.  It is approximately 12.5 meters across.  It is constructed of contrasting black and yellowish white stone.  The whitish stones form the path about 15" wide.  There is much symbolism associated with the Chartres labyrinth.  The labyrinth incorporated the shape of the cross as seen by the positioning of the labyrs'.
Rose Centre:The Rose is often used as a symbol
for Mary, Mother of Jesus, to whom the cathedral
is dedicated.  The six petals of the rose are
sometimes taken to represent the six realms:
Mineral, Plant, Animal, Human, Angelic, Divine.
Lunations: The semi-circular shapes around the
labyrinth are called lunations.  There are 112
lunations in total around the edge of the labyrinth.
Each quadrant of the labyrinth has 28 lunations,
which suggests that it may have some
connections with the lunar cycle.

In Greek mythology, the labyrinth (Greek: λαβύρινθος labyrinthos) was an elaborate structure designed and built by the legendary artificer Daedalus for King Minos of Crete at Knossos. Its function was to hold the Minotaur eventually killed by the hero Theseus. Daedalus had so cunningly made the Labyrinth that he could barely escape it after he built it.[1]

Although early Cretan coins occasionally exhibit branching (multicursal) patterns, the single-path (unicursal) seven-course "Classical" design without branching or dead ends became associated with the Labyrinth on coins as early as 430 BC, and similar non-branching patterns became widely used as visual representations of the Labyrinth – even though both logic and literary descriptions make it clear that the Minotaur was trapped in a complex branching maze. Even as the designs became more elaborate, visual depictions of the mythological Labyrinth from Roman times until the Renaissance are almost invariably unicursal. Branching mazes were reintroduced only when garden mazes became popular during the Renaissance.

In English, the term labyrinth is generally synonymous with maze. As a result of the long history of unicursal representation of the mythological Labyrinth, however, many contemporary scholars and enthusiasts observe a distinction between the two. In this specialized usage maze refers to a complex branching multicursal puzzle with choices of path and direction, while a unicursal labyrinth has only a single path to the center. A labyrinth in this sense has an unambiguous route to the center and back and is not difficult to navigate.

Unicursal labyrinths appeared as designs on pottery or basketry, as body art, and in etchings on walls of caves or churches. The Romans created many primarily decorative unicursal designs on walls and floors in tile or mosaic. Many labyrinths set in floors or on the ground are large enough that the path can be walked. Unicursal patterns have been used historically both in group ritual and for private meditation, and are increasingly found for therapeutic use in hospitals and hospices.