Labyrinth with spiral of Valcamonica

Home > Sculptures and Statues>Labyrinths, Spirals and Petroglyphs>Labyrinth with spiral of Valcamonica 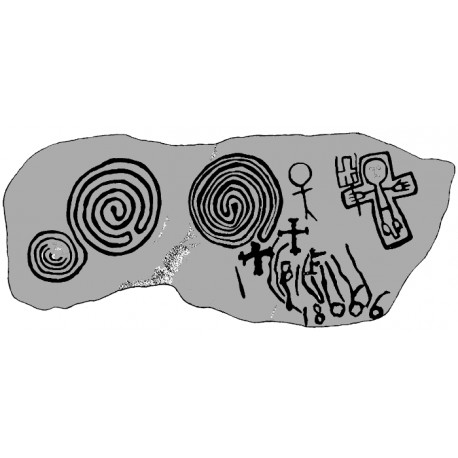 Labyrinth with spiral of Valcamonica

Labyrinth associated with spiral of Valcamonica.
Hand made by, us sizes 1:1.

Mompantero Municipality (TO-I), locality Madonna dell'Ecova, altitude 710 m. South-exposed slope, small abandoned terraces, little oak wood, vines and pastures. Close to path. Stable slab at the level of the ground, 220 x 110 cm, flat and smooth surface, inclination 25 degrees. Filladic calcschist. Engravings: triple spiral, spiral-labyrinth, simple spiral, anthropomorhic figure, Christ, cross in square field, 2 crosses, 2 letters (B.F.), date or number 18066, 8 faded channels.
Here is one of the most interesting engravings of the Valley. It's a roughly rectangular slab, exposed to the south. The zone, on the lower slope of the Rocciamelone, is very panoramic, even if from the rock the panorama is not complete. Beside the rock there is a terracement stone-wall. The surface is quite smooth and lightly waved. Suddenly appears a remarkable difference between the different elements: the two crosses and the numbers are deeper and appear to be much more recent. The spirals and the Christ have been carefully and regularly engraved, even if already faded. The few peckings are of large size, changing of measure in each different engraving. Spirals and labyrinths are present in many European rock art sites, mainly referred to Neolithic - Copper Age, but also to all prehistoric, and not only, periods. But in this case, looking at the similar pecking, a connection between the spirals and the Christ is not to be excluded. Only under grazing light it is possible to see eight narrow channels, wich are perhaps the remains of a rougher underimposed spiral or meander-like figure. The origin of the name of the nearby Church of Madonna dell'Ecova derives from the latin "excovatum" (carved): the area is covered in some parts by morainic sediments where some little caves have been excavated. Around the stone has surface archaeological diggings have been conducted, under the enchargment of the Archaeological Superintendence. A mould in elastomer has been executed by the University of Turin. In July 1989 the stone has been object of vandalic graffiti and damaged.
Source: rupestre.net