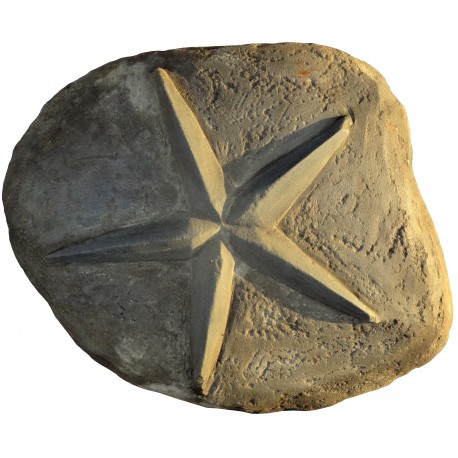 Our production, obtained from a river pebble.
We can make it in any size.

A pentacle (also spelled pantacle in Thelema, following Aleister Crowley) is an amulet used in magical evocation, generally made of parchment, paper or metal (although it can be of other materials), on which the symbol of a spirit or energy being evoked is drawn. It is often worn around the neck, or placed within the triangle of evocation. Protective symbols may also be included (sometimes on the reverse), a common one being the six-point form of the Seal of Solomon, called a pentacle of Solomon or pentangle of Solomon. Many varieties of pentacle can be found in the grimoires of Solomonic magic; they are also used in some neopagan magical traditions, such as Wicca, alongside other magical tools.
The words pentacle and pentagram (a five-point unicursal star) are essentially synonymous, according to the Online Oxford English Dictionary (2007 revision), which traces the etymology through both French and Italian back to Latin, but notes that in Middle French the word "pentacle" was used to refer to any talisman. In an extended use, many magical authors treat them as distinct. In many tarot decks and in some forms of modern witchcraft, pentacles often prominently incorporate a pentagram in their design.
There is a specific differentiation between pentacle and pentagram within Wicca and other neopagan traditions. Namely, a pentacle refers to a pentagram circumscribed by a circle. This form of pentacle is formed upon a disk which may be used either upon an altar or as a sacred space of its own. The pentacle is representative of the Earth in occult usage.