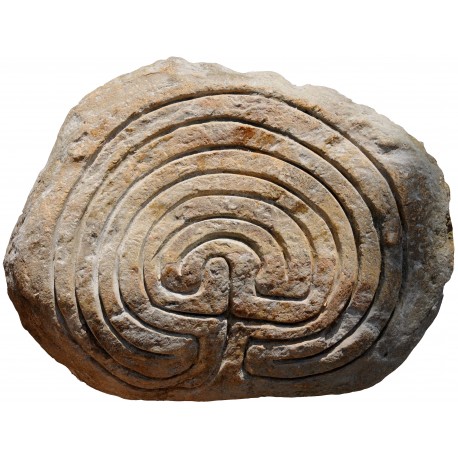 Our reproduction of the famous Hollywood Labyrinth (Hollywood stone).
We are talking about Hollywood, Co. Wicklow (Ireland), no Hollywood California.
Reproduction hand made in gray sandstone.

The Hollywood Stone
The Hollywood Stone got its name because it was was found near Hollywood, Co. Wicklow in 1908 by a group of men hunting ferrets.  It was lying face down in a grassy lane at Lockstown Upper, cutting off the angle between the Holly-Glendalough road and the road which comes from Black Ditches.
The boulder is large, measuring about 1.2 m high, by 0.9 m wide, by 0.8m thick.  The labyrinth design is approc 70cm in diameter.  A small section of the labyrinth is missing.  The labyrinth appears to have been carved using the classical seed pattern.  It is not known what way the labyrinth was orientated, although from the shape of the remainder of the Stone it may have been sited with the entrance at the bottom.
The exact purpose of the stone is unknown, although it is almost certain that the stone had some connection with the Pilgrimage to Glendalough.  It may have been used as a marker on St Kevins Road.  It may have been a 'station'  along the route where pilgrims stopped to pray.
There are also other medieval cross slabs in the vicinity of Kevins Way. At Woodenbridge (on the high road from Valleymount), there is a small road-side boulder that is inscribed with an early medieval Latin cross. There is an interesting and strikingly located medieval cross-inscribed pillar on a shoulder to the north of the top of Tonelagee mountain.
Labyrinths have many associations with pilgrimage, particularly in the Christian context.  Christians had a religious practice of going on pilgrimages to holy sites; many wanted to make the journey to the holiest shrine of all Christendom, Jerusalem. That pilgrimage was, however, expensive, arduous, dangerous, and often impossible while the Holy Land was in the possession of the Muslims. Consequently a substitute was needed - a pilgrimage to a famous cathedral where a labyrinth was installed as a symbol of 'the road to Jeruslaem'.
Interestingly, at one stage two pilgrimages to Glendalough was considered the equivalent of one pilgrimage to Jeruslaem.  However, in later times, it took seven pilgrimages to Glendalough to be equivalent to one to Jerusalem.