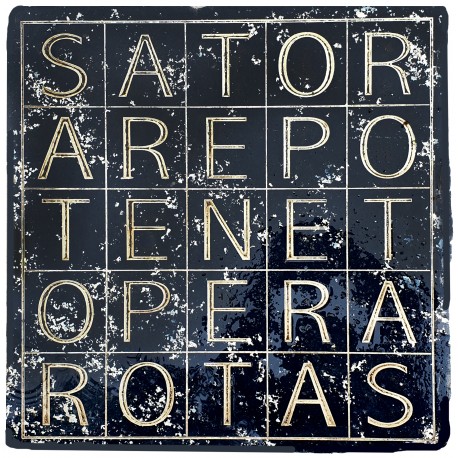 Hand made, our production.
Made on an ancient slate slab, the writing in this case is made using a numerically controlled robot.

The Sator Square (or Rotas Square) is a word square containing a five-word Latin palindrome:

The words may be read top-to-bottom, bottom-to-top, left-to-right, or right-to-left. When read top-to-bottom and left-to-right, it forms the palindromic sentence "sator arepo tenet opera rotas". Its translation has been the subject of speculation with no clear consensus, but a common interpretation is "the farmer Arepo works a plough".
The earliest dateable Sator Square was found in the ruins of Pompeii, which was buried in the ash of Mount Vesuvius in 79 AD. Examples may be found carved on stone tablets or pressed into clay before being fired. Early examples of the squares show the phrase reversed, reading "ROTAS OPERA TENET AREPO SATOR", and are known as Rotas Squares.
One likely translation is "The farmer Arepo has [as] works wheels [a plough]"; that is, the farmer uses his plough as his form of work. Although not a significant sentence, it is grammatical; it can be read up and down, backwards and forwards. C. W. Ceram also reads the square boustrophedon (in alternating directions). But since word order is very free in Latin, the translation is the same. If the Sator Square is read boustrophedon, with a reverse in direction, then the words become SATOR OPERA TENET, with the sequence reversed.
The word arepo is a hapax legomenon, appearing nowhere else in Latin literature. Its similarity with arrepo, from ad repo, 'I creep towards', may be coincidental. Most of those who have studied the Sator Square agree that it is a proper name, either an adaptation of a non-Latin word or most likely a name invented specifically for this sentence. Jerome Carcopino thought that it came from a Celtic, specifically Gaulish, word for plough. David Daube argued that it represented a Hebrew or Aramaic rendition of the Greek Αλφα ω, or "Alpha-Omega" (cf. Revelation 1:8) by early Christians. J. Gwyn Griffiths contended that it came, via Alexandria, from the attested Egyptian name Ḥr-Ḥp, which he took to mean "the face of Apis". An origin in Graeco-Roman Egypt was also advocated by Miroslav Marcovich, who maintains that Arepo is a Latinized abbreviation of Harpocrates, god of the rising sun, in some places called Γεωργός `Aρπον, which Marcovich suggests corresponds to Sator Arepo.
In Cappadocia, in the time of Constantine VII, Porphyrogenitus (913-959), the shepherds of the Nativity story are called SATOR, AREPON, and TENETON, while a Byzantine bible of an earlier period conjures out of the square the baptismal names of the three Magi, ATOR, SATOR, and PERATORAS.
If "arepo" is taken to be in the second declension, the "-o" ending could put the word in the ablative case, giving it a meaning of "by means of [arepus]." Using this definition of "arepo" and the boustrophedon reading order produces the text "The sower works for mastery by turning the wheel."