Majolica identification plate of a farmhouse in Tuscany 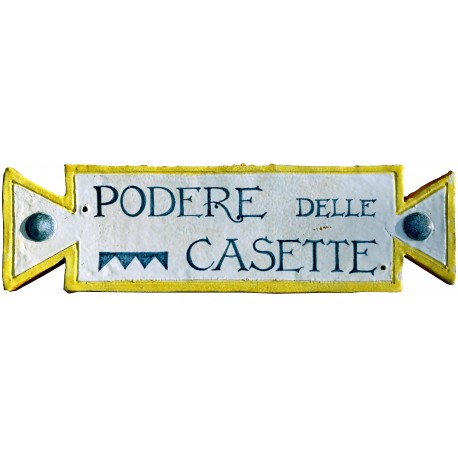 Majolica identification plate of a farmhouse in Tuscany

Maiolica our production.
These plates were affixed to the facade of the farmhouse and usually overlaid the noble coat of arms of the farm's own family.
This tradition was in use since the mid-fourteenth century, mainly by the famous family of Florentine artists "Della Robbia".

They were affixed to the facades of the farmhouses with the coat of arms of the noble family of the farm. This tradition was in use since the mid-fourteenth century, typical especially of the famous Florentine artist family "Della Robbia".

I Della Robbia are a family of Italian sculptors specializing in the glass polycarbonate terracotta technique invented by Luca, which opened a lucrative laboratory in Florence.
The name comes from a tintinnio, that is red, so it is thought that the family, documented in the 13th century in the city, was a family belonging to the Art of Tintori. Florentine majolics traditionally still today are called robbants.

Its most famous components are:

Luca (of Simone) of Robbia (about 1400 BC-1482) began his career as a sculptor next to Donatello, then discovered the technique for making polychrome sculptures (in fact, only blue and white or ivory) using enamelled terracotta; he developed this technique successfully and devoted exclusively to the abandonment of sculpture; his store has been very active and has delivered the technique to his relatives by guaranteeing family success for generations.

Andrea della Robbia (1435-1525), nephew of Luca, son of his brother Marco, develops the technique learned from his uncle and led him to broad spectrum thanks to some innovations that have created a proto-industrial laboratory thanks to the remarkable efficiency and its rapid creation of works.

Giovanni della Robbia (1469-1529), son of Andrea, has experimented with the technique by expanding the number of colors available and using it with greater emphasis. His work is of great technical and artistic experience, but compared to his predecessors he is a little flat and in a style that has become conventional. After his disappearance, the family store did not find valid heirs and ceased to do business.

The rival of Della Robbia's shop was that of Saints and Benedetto Buglioni.
Source Wikipedia