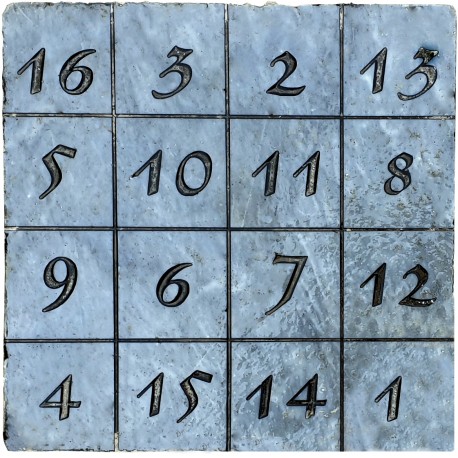 The magic square made of gray bardiglio marble from the Apuan Alps.
Our exclusive production.

Magic squares have a long history, dating back to at least 190 BCE in China. At various times they have acquired magical or mythical significance, and have appeared as symbols in works of art. In modern times they have been generalized a number of ways, including using extra or different constraints, multiplying instead of adding cells, using alternate shapes or more than two dimensions, and replacing numbers with shapes and addition with geometric operations.

Melencolia I is a 1514 engraving by the German Renaissance artist Albrecht Dürer. The print's central subject is an enigmatic and gloomy winged female figure thought to be a personification of melancholia. Holding her head in her hand, she stares past the busy scene in front of her. The area is strewn with symbols and tools associated with craft and carpentry, including an hourglass, weighing scales, a hand plane and a saw. Other objects relate to alchemy, geometry or numerology. Behind the figure is a structure with a magic square embedded in it and a ladder leading beyond the frame. The sky contains a rainbow, a comet or planet, and a bat-like creature bearing the text that has become the print's title.

Dürer's engraving is one of the most well-known extant old master prints, but, despite a vast art-historical literature, it has resisted any definitive interpretation. Dürer may have related melancholia with creative activity; the woman may be a representation of a Muse, awaiting inspiration but fearful that it will not return. As such, Dürer may have intended the print as a veiled self-portrait. Other art historians see the figure as pondering the nature of beauty or the value of artistic creativity in light of rationalism, or as a purposely obscure work that highlights the limitations of allegorical or symbolic art.

The art historian Erwin Panofsky, whose writing on the print has received the most attention, detailed its possible relation to Renassiance humanists' unique conception of melancholia. Summarizing its art-historical role and legacy, he wrote that "the influence of Dürer's Melencolia I—the first representation in which the concept of melancholy was transplanted from the plane of scientific and pseudo-scientific folklore to the level of art—extended all over the European continent and lasted for more than three centuries.