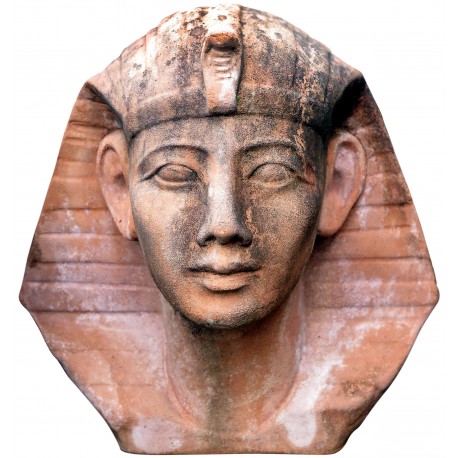 Terracotta, hand made in Tuscany.
Copy of the bust of Tutankhamon from Cairo Egyptian Museum.

Tutankhamun (/ˌtuːtənkɑːˈmuːn/; alternatively spelled with Tutenkh-, -amen, -amon) was an Egyptian pharaoh of the 18th dynasty (ruled c. 1332–1323 BC in the conventional chronology), during the period of Egyptian history known as the New Kingdom or sometimes the New Empire Period. He has since his discovery been colloquially referred to as King Tut. His original name, Tutankhaten, means "Living Image of Aten", while Tutankhamun means "Living Image of Amun". In hieroglyphs, the name Tutankhamun was typically written Amen-tut-ankh, because of a scribal custom that placed a divine name at the beginning of a phrase to show appropriate reverence. He is possibly also the Nibhurrereya of the Amarna letters, and likely the 18th dynasty king Rathotis who, according to Manetho, an ancient historian, had reigned for nine years—a figure that conforms with Flavius Josephus's version of Manetho's Epitome.
The 1922 discovery by Howard Carter and Lord Carnarvon of Tutankhamun's nearly intact tomb received worldwide press coverage. It sparked a renewed public interest in ancient Egypt, for which Tutankhamun's mask, now in the Egyptian Museum, remains the popular symbol. Exhibits of artifacts from his tomb have toured the world. In February 2010, the results of DNA tests confirmed that he was the son of Akhenaten (mummy KV55). His mother was Akhenaten's sister and wife (mummy KV35YL), whose name is unknown but whose remains are positively identified as "The Younger Lady" mummy found in KV35. The "mysterious" deaths of a few of those who excavated Tutankhamun's tomb has been popularly attributed to the curse of the pharaohs