Torso of the Laocoon 1: 1 in plaster

Home > Sculptures and Statues>Plaster Cast - Our Gallery ➤>Torsi>Torso of the Laocoon 1: 1 in plaster 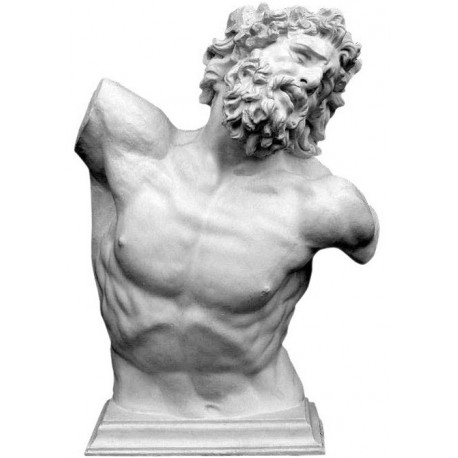 Torso of the Laocoon 1: 1 in plaster

Beautiful 1: 1 life size Torso from the Laocoon of the Vatican Museums.
It was carved by Agesandro, Polidoro and Atanodoro of Rhodes.
Probable marble copy executed between the 1st century BC and 1st century AD of a bronze original of 150 BC about.

Laocoön;  the son of Acoetes, is a figure in Greek and Roman mythology and the Epic Cycle. He was a Trojan priest who was attacked, with his two sons, by giant serpents sent by the gods. The story of Laocoön has been the subject of numerous artists, both in ancient and in more contemporary times. The most detailed description of Laocoön's grisly fate was provided by Quintus Smyrnaeus in Posthomerica, a later, literary version of events following the Iliad. According to Quintus, Laocoön begged  the Trojans to set fire to the horse to ensure it was not a trick. Athena, angry with him and the Trojans, shook the ground around Laocoön's feet and painfully blinded him. The Trojans, watching this unfold, assumed Laocoön was punished for the Trojans' mutilating and doubting Sinon, the undercover Greek soldier sent to convince the Trojans to let him and the horse inside their city walls. Thus, the Trojans wheeled the great wooden Horse in. Laocoön did not give up trying to convince the Trojans to burn the horse, and Athena made him pay even further. She sent two giant sea serpents to strangle and kill him and his two sons.[4] In another version of the story, it was said that Poseidon sent the sea serpents to strangle and kill Laocoön and his two sons.

According to Apollodorus, it was Apollo who sent the two sea serpents. Laocoön had insulted Apollo by sleeping with his wife in front of the "divine image".

Virgil used the story in the Aeneid. According to Virgil, Laocoön advised the Trojans to not receive the horse from the Greeks. They disregarded Laocoön's advice and were taken in by the deceitful testimony of Sinon. The enraged Laocoön threw his spear at the Horse in response. Minerva then sent sea-serpents to strangle Laocoön and his two sons, Antiphantes and Thymbraeus, for his actions. "Laocoön, ostensibly sacrificing a bull to Neptune on behalf of the city, becomes himself the tragic victim, as the simile makes clear. In some sense, his death must be symbolic of the city as a whole," S. V. Tracy notes.[6] According to the Hellenistic poet Euphorion of Chalcis, Laocoön is in fact punished for procreating upon holy ground sacred to Poseidon; only unlucky timing caused the Trojans to misinterpret his death as punishment for striking the Horse, which they bring into the city with disastrous consequences. The episode furnished the subject of Sophocles' lost tragedy, Laocoön.