Titus - Round Roman bas-relief in terracotta 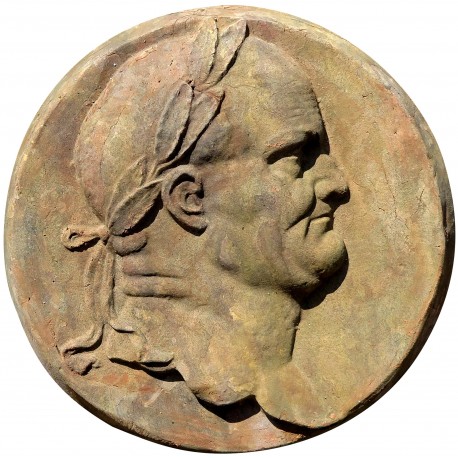 Titus - Round Roman bas-relief in terracotta

Titus (Latin: Titus Flāvius Caesar Vespasiānus Augustus; 30 December 39 AD – 13 September 81 AD) was Roman emperor from 79 to 81. A member of the Flavian dynasty, Titus succeeded his father Vespasian upon his death, thus becoming the first Roman Emperor to come to the throne after his own biological father.
Prior to becoming Emperor, Titus gained renown as a military commander, serving under his father in Judea during the First Jewish–Roman War. The campaign came to a brief halt with the death of emperor Nero in 68, launching Vespasian's bid for the imperial power during the Year of the Four Emperors. When Vespasian was declared Emperor on 1 July 69, Titus was left in charge of ending the Jewish rebellion. In 70, he besieged and captured Jerusalem, and destroyed the city and the Second Temple. For this achievement Titus was awarded a triumph: the Arch of Titus commemorates his victory to this day.
Under the rule of his father, Titus gained notoriety in Rome serving as prefect of the Praetorian Guard, and for carrying on a controversial relationship with the Jewish queen Berenice. Despite concerns over his character, Titus ruled to great acclaim following the death of Vespasian in 79, and was considered a good emperor by Suetonius and other contemporary historians.
As emperor, he is best known for completing the Colosseum and for his generosity in relieving the suffering caused by two disasters, the eruption of Mount Vesuvius in AD 79 and a fire in Rome in 80. After barely two years in office, Titus died of a fever on 13 September 81. He was deified by the Roman Senate and succeeded by his younger brother Domitian.