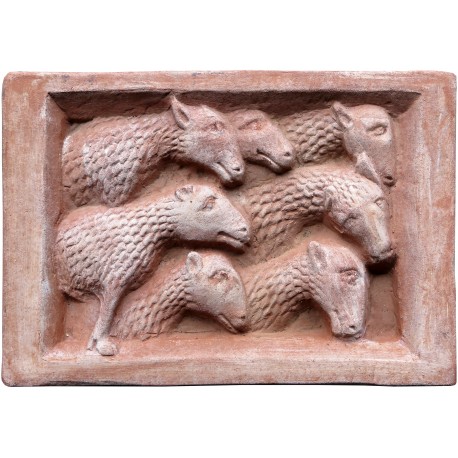 Hand made in terracotta.

Wiligelmo (also known as Wiligelmus, Gulielmo da Modena, Cousin of Elmo or Guglielmo da Modena) was an Italian sculptor, active between c. 1099 and 1120. He was the first sculptor in Italy who started again to produce large size sculptures and signed his work.

Wiligelmo was the carver of the Creation and Temptation of Adam and Eve (ca. 1110) reliefs at the west facade of the Duomo di Modena (Cathedral of Modena) in Italy.

Nonantola Abbey, dedicated to Saint Sylvester, is a former a Benedictine monastery and prelature nullius in the commune of Nonantola, c. 10 km north-east of Modena, in the Emilia Romagna region of Italy. The abbey church remains as a basilica and is the co-cathedral of the diocese of Modena-Nonantola.
The abbey was founded in 752 by Saint Anselm, Duke of Friuli and brother-in-law of the Lombard king Aistulf. The latter richly endowed the new abbey, starting its role as one of the main landed proprietors of northern Italy. Pope Stephen II appointed Anselm its first abbot, and presented some relics of Saint Sylvester to the abbey, named in consequence S. Silvestro de Nonantula. After the death of Aistulf in 756, Anselm was banished to Monte Cassino by the new king, Desiderius, but was restored by Charlemagne after seven years. In 813 the abbot Peter of Nonantola was chosen as Imperial ambassador to Constantinople. His successor, Ansfrid, held the same post in 828. In 883 the abbey was chosen as the place of a conference between Charles the Fat and Pope Marinus I.
Relief of Anselm founding the Abbey

In 900 the monastery and church were completely destroyed by invading Hungarians, and all who had not fled were killed. Reconstruction began almost immediately.

Up to the 11th century Nonantola was an imperial monastery, and its discipline often suffered severely on account of imperial interference in the election of abbots: Nonantola was in fact one of the most powerful abbeys of Europe and control over it was considered a major issue by the emperors and popes. It had a famous scriptorium and the abbot Godeschalc had a new basilica built in 1058. At the beginning of the Investiture Conflict it sided with the emperor, until forced to submit to the pope by Matilda of Tuscany in 1083. It finally declared itself openly for the papal party in 1111. In that year the famous monk Placidus of Nonantola wrote his De honore Ecclesiæ, one of the most able and important defences of the papal position that was written during the Investiture Conflict.

The decline of the monastery can be dated to 1419, when it came under the jurisdiction of commendatory abbots. In 1514 abbot Gian Matteo Sertorio gave it to the Cistercians, but the abbey continued to decline until it was suppressed by Pope Clement XIII in 1768.[1] Alternatively it may have been replaced by Duke Francesco III d'Este in 1783, during the abbacy of Francesco Maria d'Este, with a collegiate foundation of canons.

Pope Pius VII restored it as a monastery on January 23, 1821, with the provision that the prelature nullius attached to it should belong to the Archbishop of Modena, into which the exempt territory was finally absorbed in 1986 to form the Diocese of Modena-Nonantola. The monastery itself was appropriated by the Italian government in 1866.

17 other products in the same category: