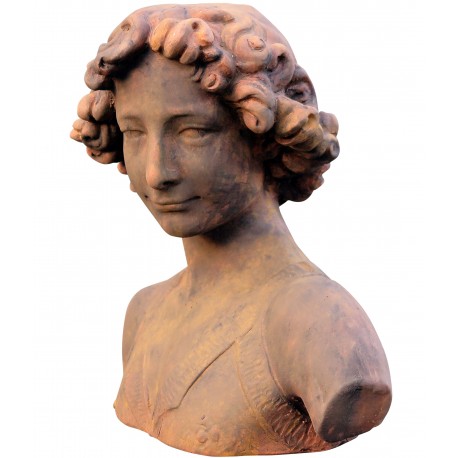 Terracotta repro of the Verrocchio's David.
The original statue is in Museo del Bargello in Florence.

Andrea del Verrocchio's bronze statue of David was most likely made between 1473 and 1475. It was commissioned by the Medici family. It is sometimes claimed that Verrocchio modeled the statue after a handsome pupil in his workshop, the young Leonardo da Vinci.
The statue represents the youthful David, future king of the Israelites, triumphantly posed over the head of the slain Goliath.
The bronze was initially installed in Palazzo Vecchio in 1476.[1]
Placement of Goliath's head has been a source of some debate for art historians. When exhibited at the National Gallery of Art, the head was placed between David's feet,[1] as is the case in the statue's permanent home, the National Museum of the Bargello, in Florence, Italy. Another school of art historians have suggested that Verrocchio intended for Goliath's head to be placed to David's right, pointing to the diagonals of the ensemble. This placement was temporarily arranged at the National Gallery of Art, as well as Atlanta's High Museum, among others.
David was intended as a representation of Florence, as both were more powerful than they appeared, and both the shepherd boy and Florence could be viewed as rising powers.
The Victoria & Albert Museum in London also owns a plaster cast of Verrocchio's David.