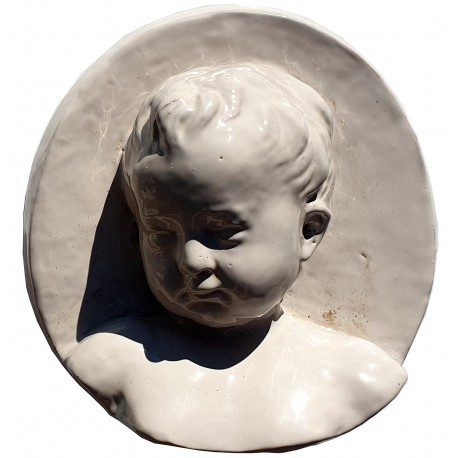 Copy of a child on the left, part of the famous series of the Children of the Innocent Institute (formerly Spedale degli Innocenti), a building located in Piazza Santissima Annunziata in Florence.

The Ospedale degli Innocenti is a historic building in Florence, Italy. It was designed by Filippo Brunelleschi, who received the commission in 1419 from the Arte della Seta. It was originally a children's orphanage. It is regarded as a notable example of early Italian Renaissance architecture. The hospital, which features a nine bay loggia facing the Piazza SS. Annunziata, was built and managed by the "Arte della Seta" or Silk Guild of Florence. That guild was one of the wealthiest in the city and, like most guilds, took upon itself philanthropic duties.
The façade is made up of nine semicircular arches springing from columns of the Composite order. The semicircular windows bring the building down, earthbound and is a revival of the classical style, no longer a pointed arch. In the spandrels of the arches there are glazed blue terracotta roundels with reliefs of babies designed by Andrea della Robbia suggesting the function of the building. There is an emphasis on the horizontal because the building is longer than it is tall. Above each semicircular arch is a tabernacle window (a rectangular window with a triangular pediment on the top).
The building reveals a clean and clear sense of proportion. The height of the columns is the same as the width of the intercolumniation and the width of the arcade, making each bay a cube. The building's simple proportions reflect a new age, one of secular education, and a sense of great order and clarity. Similarly, the height of the entablature is half the column height, as is appropriate for a clear-minded society.
Children were sometimes abandoned in a basin which was located at the front portico. However, this basin was removed in 1660 and replaced by a wheel for secret refuge. There was a door with a special rotating horizontal wheel that brought the baby into the building without the parent being seen. This allowed people to leave their babies, anonymously, to be cared for by the orphanage. This system was in operation until the hospital's closure in 1875. Today the building houses a small museum of Renaissance art with works by Luca della Robbia, Sandro Botticelli, Piero di Cosimo and Adoration of the Magi by Domenico Ghirlandaio.