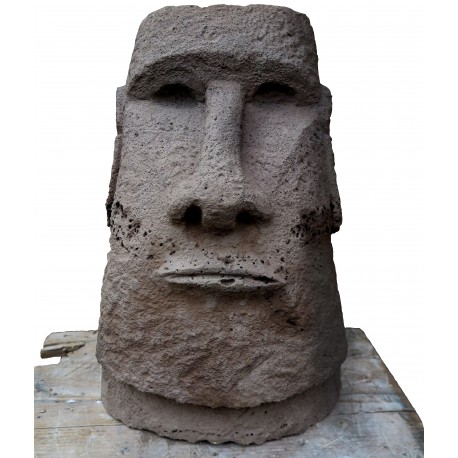 Scale reproduction in dark porous basalt from Paulilatino (Sardinia).
The work was sculpetd from a basalt cube 240 Kg 60x38x38 cm.
We carved about six full days of manual work in our laboratory in Forte dei Marmi (Lucca) Italy.
Look at the work in progress.
The MOAI we carved follows a primitive model.

Moai  are monolithic human figures carved by the Rapa Nui people on Easter Island in eastern Polynesia between the years 1250 and 1500 CE. The tallest moai erected was almost 10 metres (33 ft) high.
Nearly half are still at Rano-raraku, the main moai quarry, but hundreds were transported from there and set on stone platforms, called ahu, around the island's perimeter. Also our reproduction is coming from Rano-raraku quarry.
Archaeologists believe that the statues were a representation of the ancient Polynesians' ancestors. The moai statues face away from the ocean and towards the villages as if to watch and protect over the people.

«The miracle of Easter Island lies in the courage that drove the inhabitants of a small island, devoid of resources to draw on the horizon of the Pacific, monuments worthy of a great people.» Alfred Métraux, Easter Island

«Sculpture, the setting up of a stone, as a basic human activity. That way of making a sculpture is a religious activity. What the Easter Island sculptor since Rodin has looked to primitive sculpture, because all the unnecessary elements are removed. Anything that is left in is what stresses the power of the stone. We are down to the essence; its size, its simplicity, its monumentality and its placement – those are all things that matter.» The sculptor Anthony Caro about the original Moai conserved in British Museum; from A History of the World in 100 Objects by Neil MacGregor, Director of the British Museum from 2002 to 2015.