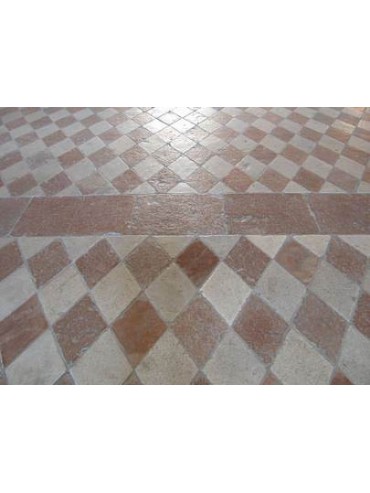 FLOOR REPRODUCED IN WHITE LIMESTONE and RED VERONA MARBLE.
Copy of the floor of the famous Basilica of Santa Maria di Collemaggio in L'Aquila.
This floor can be made with any marble available on the market, ask for quotes.

The basilica of Santa Maria di Collemaggio is a religious building in L'Aquila, located just outside the city walls, on the hill of the same name.
Founded in 1288 at the behest of Pietro da Morrone - crowned pope here with the name of Celestino V on 29 August 1294 - it is considered the highest expression of Abruzzo architecture, as well as the symbol of the city and was declared a national monument in 1902. Since 1327 houses the remains of the pontiff, currently preserved inside the mausoleum of Celestino V, built in 1517 by Girolamo da Vicenza, master of Andrea Palladio. It is the seat of an annual jubilee, the first in history, established with the Bull of Forgiveness of 29 September 1294, now known as the Celestinian Perdonance and classified by Unesco among the oral and intangible heritages of humanity; therefore, it is characterized by the presence of a Holy Door on the side facade.
The church, which boasts the title of minor basilica together with the fellow citizens San Bernardino and San Giuseppe Artigiano, has been remodeled several times over the centuries mainly due to the damage caused by frequent earthquakes and presents a mixture of different architectural styles. Following the 2009 earthquake, it underwent consolidation and restoration works that ended in 2017 and received the European Union cultural heritage award in 2020.

Red marble from Verona Red
Verona marble is a nodular limestone which, as regards the classification of stone materials, falls within the group of polishable limestones. Inside it has fossil skeletons of ammonites and belemnite beaks immersed in a microsparitic matrix formed by fecal pellets. It can be extracted from the formation of Rosso Ammonitico Veronese, emerging and extracted in the Lessini Mountains. Among the various buildings built with this marble we also remember the Baptistery of Parma, the columns of the cloister of the Basilica of San Zeno in Verona, the column-bearing lions of the Red Lion Gate of the Basilica of Santa Maria Maggiore in Bergamo, the sepulchral ark of Berardo Maggi in the old Cathedral of Brescia and the Church of the Most Holy Name of Mary in the Workers' Village of Crespi d'Adda.

French limestone
Limestone is a sedimentary rock whose main component is represented by the mineral calcite. The limestone deposits, therefore the mineral itself, are more or less permeated by clayey or quartzite impurities. Calcite is a mineral often coupled with dolomite