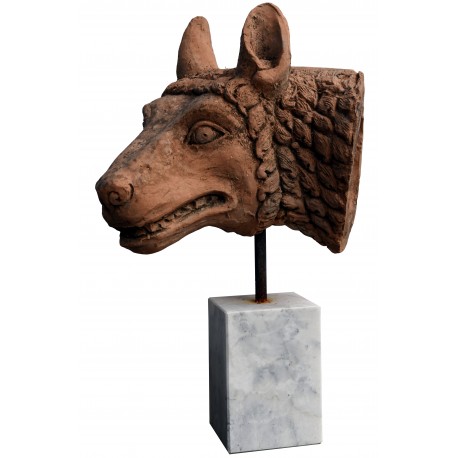 Head of the Roman Capitoline Wolf, patinated terracotta.
The original is located in the Capitoline Museums.
Our production

The Capitoline Wolf (Italian: Lupa Capitolina) is a bronze sculpture of the mythical she-wolf suckling the twins, Romulus and Remus, from the legend of the founding of Rome. When Numitor, grandfather of the twins, was overthrown by his brother Amulius, the usurper ordered them to be cast into the Tiber River. They were rescued by a she-wolf who cared for them until a herdsman, Faustulus, found and raised them. The Capitoline Wolf has been housed since 1471 in the Palazzo dei Conservatori on the Campidoglio (the ancient Capitoline Hill), Rome, Italy.
The age and origin of the Capitoline Wolf is a subject of controversy. The statue was long thought to be an Etruscan work of the 5th century BC,[1] with the twins added in the late 15th century AD, probably by the sculptor Antonio Pollaiolo. However, radiocarbon and thermoluminescence dating has found that the wolf portion of the statue was likely cast between 1021 and 1153.
The sculpture is somewhat larger than life-size, standing 75 cm high and 114 cm long. The wolf is depicted in a tense, watchful pose, with alert ears and glaring eyes watching for danger. By contrast, the human twins – executed in a completely different style – are oblivious to their surroundings, absorbed by their suckling.

27 other products in the same category: