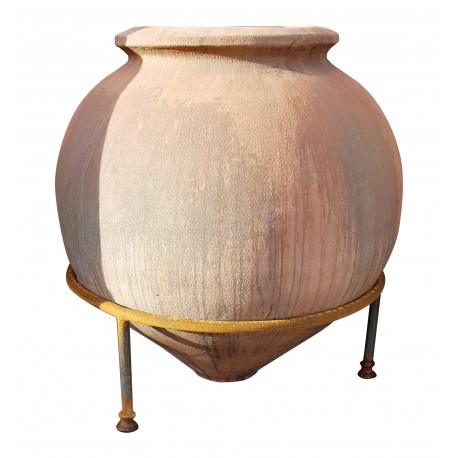 A dolium (plural: dolia) is a large earthenware vase or vessel used in ancient Roman times for storage or transportation of goods. It's similar to Kvevri which is widely used for wine farming in Georgia to this day.
Though many modern authors[who?] make the mistake of translating a dolium as a wooden barrel, it was actually a very large jug or container made of fired clay. Oval in shape, with a wide mouth and rim, it was much larger than the amphora, a similar pottery container. The dolium had no neck or handles and, in many cases, could measure up to six feet in height. Some dolia have a rounded body tapering into a flat bottom, while more frequently, dolia maintained a rounded bottom. They were lined with pitch or wax in order to contain or process liquids and solid foods. Some sources mention dolia holding up to 50 quadrantals, equivalent to 346.5 gallons. Though there was no standard size for dolia, even the smallest capacity recorded by Pliny the Elder was large for Roman earthenware containers.
Much of what modern scholars know about the dolium comes from ancient Latin literature. Sources which address agriculture, significantly De Agri Cultura by Cato the Elder, Res Rustica by Varro, Res Rustica by Columella, and the Res Rustica by Palladius, help us determine the size, appearance and purposes of the dolia. Because these sources deal with rural matters of the time, they also give scholars an insight into the life and culture of ancient Rome in addition to specific information about use of the dolium. Another noteworthy source is the Digest of Justinian. It is a collection of quotations from earlier works of Roman jurists that discuss the importance of the integration of dolia in ancient Roman society. These sources, along with a variety of other less significant sources where dolia are only briefly mentioned, characterize the dolia as the largest type of earthenware vessel made by the Romans.