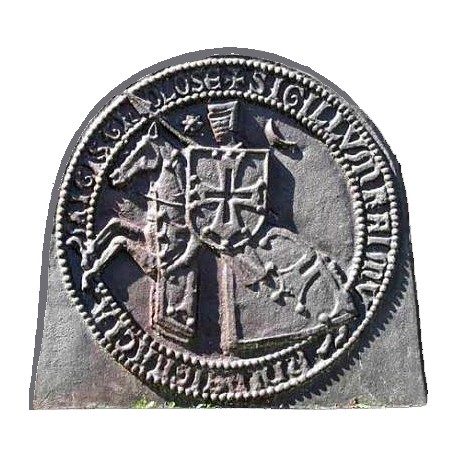 Large cast iron slab for fireplace with horseman Templar knight.
The image reproduce an important medieval French seal of Raymond VII, Count of Toulouse. Transcription: sigillum raimundi dei gracia [c]omitis tholose (Seal of Raymond by the Grace of God Count of Toulouse)
In the images you can see the original seal.

Description: Count on horseback, turning toward the left, lance at ready, the cross of Toulouse on his shield and his horse's cloth; to the right of his head, a star; to the left, a crescent moon;

Appended to the April 1228 treaty of Paris between the Count and King Louis IX of France (St. Louis)

Arms of the Counts of Toulouse. Click for a larger image in a new window. Click on the following link for more on Raymond VII of Toulouse


A common way to proclaim the authenticity of a document in the Middle Ages was to attach a seal to it. Medieval seals were images carved into a matrix which, when pressed into a substance like warm wax, left behind a counter image of the picture on the seal. The image, usually with a legend written around it in Latin, identified the author of the document and was intended to prevent people from forging or tampering with official correspondence.

In an age when illiterate people needed to transact business, seals allowed people to declare their consent to an agreement even when they were unable to sign their own names.

For much of the early Middle Ages the use of seals was restricted to kings and popes. Many of these seals featured a head-portrait, often in a style emulating Imperial Roman and Byzantine seals and coinage. These evolved around 1000 A.D. into portraits featuring a seated monarch bearing indicators of his power (swords, scepters, orbs).

In the tenth century the use of seals spread to princes and, later, to bishops, with other ecclesiastical officials adopting seals in the twelfth century, with each rank adapting its own form of dignity-portrait. Many towns and monastic houses adopted the hagiological type of seal-design, featuring the patron saint in a full-length portrait. Two other kinds of seal-design that emerged in this period were the topographical type (featuring building portraits) and the cartographical type (featuring the plan of the town). These two types were frequently used by corporate entities such as monastic houses and towns. Two final kinds of seals frequently employed in the High and Late Middle Ages are the equestrian type (which may be civilian or military) and armorial seals, generally used only by the secular

Seals provide important tools for research in the history of the Middle Ages.

26 other products in the same category: