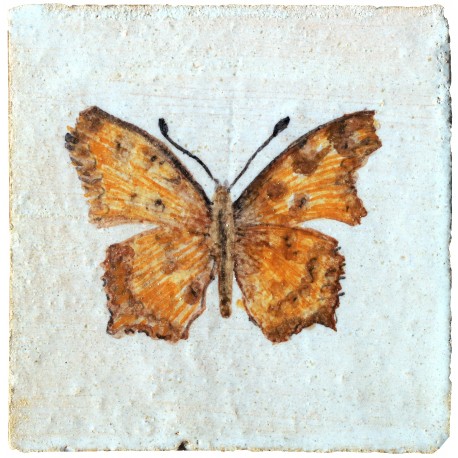 The Comma (Polygonia c-album) is a species of butterfly belonging to the family Nymphalidae. Its irregular wing edges are characteristic of the Polygonia genus, which is why they are commonly called anglewings. It is found in northern Africa and across Europe from Portugal through Asia as far as Japan. Its dorsal wings are colourful but its underside has a pattern that camouflages it when its wings are held together.
Polygonia c-album has a wingspan of about 45 millimetres (1.8 in).[1] The underside of the wings of this butterfly are a dull brown colour, with a small white 'C' shaped marking resembling a comma (hence the common name).[1] The wings have a distinctive ragged edge, apparently a cryptic form as the butterfly resembles a fallen leaf.

These butterflies hibernate, so they could be seen all around the year, but the active flying period extends from April to November, depending on location.[1] Adults feed on nectar, mainly of Thistles (Cirsium and Carduus spp.), but also on Bramble (Rubus fruticosus), Ivy (Hedera helix), Knapweeds (Centaurea spp.), and Privet (Ligustrum vulgare).

Females lay up to 275 green eggs, which turn yellow and ultimately grey before hatching.[2] The caterpillars are also cryptic. They are black and white, resembling a bird dropping.[1] In the U.K the larvae feed on Hop (Humulus lupulus), Common Nettle (Urtica dioica), Elm (Ulmus species), and Blackcurrant (Ribes nigrum); in other parts of its distribution it also feeds on Sallow (Salix species), Corylus avellana and Birch (Betula species).

The species survives the winter in the adult stage, and adults are of two forms. The form that overwinters before reproducing has dark undersides of the wings, resembling a dead leaf, a perfect camouflage throughout the winter The majority of the offspring have this dark form.

The form that develops directly to sexual maturity (hutchinsoni form) has lighter coloured wing undersides. Both forms can arise from eggs laid by the same female, depending mainly on the photoperiods experienced by the larvae, but also with an influence of host plants, temperature, and sex of individuals.