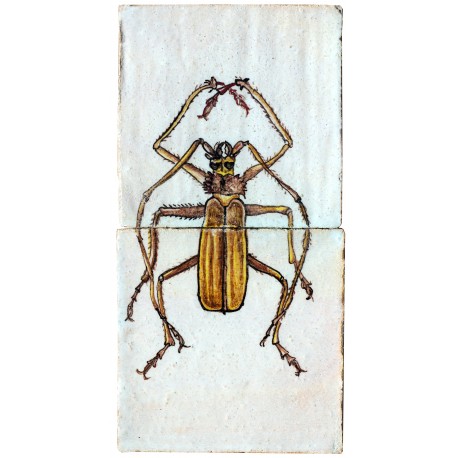 Hand made majolica tile.
This tile picture the The Cerambyx cerdo.

commonly known as great capricorn beetle, is a species of beetle in family Cerambycidae. It is widespread in Algeria, Armenia, Austria, Azerbaijan, Belarus, Bulgaria, Croatia, the Czech Republic, France, Georgia, Germany, Hungary, Iran, Italy, Moldova, Morocco, Poland, Spain, Sweden, Switzerland, Tunisia, Turkey, Ukraine, and the United Kingdom.[1]
This beetle measures between 41 and 55 mm in body length and is among the largest of the European beetle species. It has an elongated, robust body and, like all members of the longhorn family, it has long antennae. In males, these thread-like antennae are longer than the body, but in females they are only as long as the hard wing cases (the elytra). The legs and body are black, except for the elytra which are reddish-brown towards the tips.