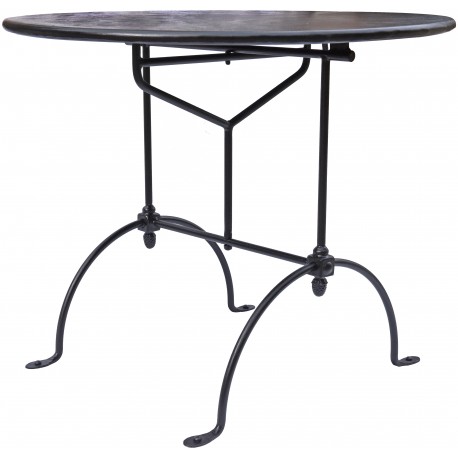 For the realization of this lovely folding table we took inspiration from the famous Henry Cartier Bresson photo taken in Florence in 1933.
Round table, forged iron hand-made by us.
Hand made in Italy.
We can also make it with tops of different diameters (70 cm / 80 cm / 100 cm / 110 cm).

Henri Cartier-Bresson ( August 22, 1908 – August 3, 2004) was a French humanist photographer considered a master of candid photography, and an early user of 35 mm film. He pioneered the genre of street photography, and viewed photography as capturing a decisive moment. His work has influenced many photographers.
Henri Cartier-Bresson was born in Chanteloup-en-Brie, Seine-et-Marne, France, the oldest of five children. His father was a wealthy textile manufacturer, whose Cartier-Bresson thread was a staple of French sewing kits. His mother's family were cotton merchants and landowners from Normandy, where Henri spent part of his childhood. The Cartier-Bresson family lived in a bourgeois neighborhood in Paris, Rue de Lisbonne, near Place de l'Europe and Parc Monceau. His parents supported him financially so Henri could pursue photography more freely than his contemporaries. Henri also sketched.
Young Henri took holiday snapshots with a Box Brownie; he later experimented with a 3×4 inch view camera. He was raised in traditional French bourgeois fashion, and was required to address his parents with formal vous rather than tu. His father assumed that his son would take up the family business, but Henri was strong-willed and also feared this prospect.
Cartier-Bresson attended École Fénelon, a Catholic school that prepared students for the Lycée Condorcet. A governess called "Miss Kitty" who came from across the Channel, instilled in him the love of - and competence in - the English language.
The proctor caught him reading a book by Rimbaud or Mallarmé, and reprimanded him, "Let's have no disorder in your studies!". Cartier-Bresson said, "He used the informal 'tu', which usually meant you were about to get a good thrashing. But he went on, 'You're going to read in my office.' Well, that wasn't an offer he had to repeat."