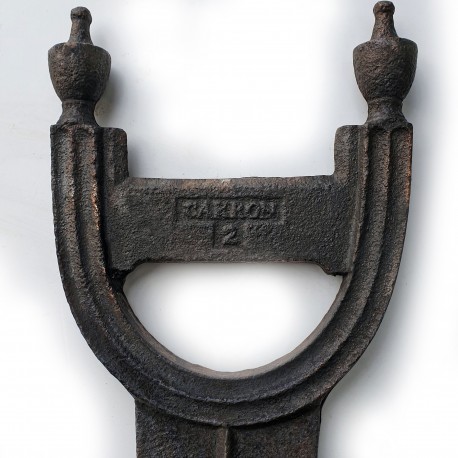 Beautiful English footstool from the famous CARRON Company (1759).
Bronze casting.
On the front of the foot-pad the CARRON mold appears with the indication 2 concerning the measurement, in fact there was a slightly smaller model.

The Carron Company was an ironworks established in 1759 on the banks of the River Carron near Falkirk, in Stirlingshire, Scotland. After initial problems, the company was at the forefront of the Industrial Revolution in the United Kingdom. The company prospered through its development and production of a new short-range and short-barrelled naval cannon, the carronade. The company was one of the largest iron works in Europe through the 19th century. After 223 years, the company became insolvent in 1982 and was later acquired by the Franke Corporation, being rebranded Carron Phoenix.

The original founders of the Carron Works were: John Roebuck, a medical doctor and chemist from Sheffield; his two brothers, Thomas Roebuck and Ebenezer Roebuck; Samuel Garbett, a merchant from Birmingham; William Cadell, Senior, an industrialist from a merchant family, from Cockenzie, East Lothian; his son, William Cadell, Junior; and John Cadell.

The factory of "Roebuck, Garbett and Cadells" was established on the north bank of Carron Water, two miles north of Falkirk. Taking iron ore from Bo'ness and water from the Carron, they decided to use the new method pioneered by Abraham Darby at Coalbrookdale, using coke from coal mines in the vicinity as fuel rather than the usual charcoal.[3][4] The works helped to push other less technologically advanced ironworks, such as the Wealden iron industry based in the Weald, out of business.

Caddell's young son, also William, was appointed manager, and the company's financial position was precarious in its first few years. It took time and a considerable investment to create the necessary infrastructure and for the largely unskilled workforce to develop the techniques of iron working. The first blast furnace became operational on 26 December 1760, producing pig iron. However, when the factory started to produce cast iron goods, they were of a generally poor quality. Nevertheless, in 1764, the Board of Ordnance granted the company a lucrative contract to supply armaments to the British armed forces. The company also cast parts for James Watt's steam engine in 1765.

The company's fortunes had begun to improve as a result of Charles Gascoigne becoming a partner in 1765. Gascoigne was a grandson of Charles Elphinstone, 9th Lord Elphinstone and had married Samuel Garbett's daughter in 1759. Gascoigne introduced many improvements in the company's techniques of production, and devoted considerable effort to increasing the quality of its work, and he took over the management of the works from William Cadell, Jr, in 1769.

The company's strict control over its supply of resources, including use of coal miners under conditions of life bondage, gave rise to disputes, with troops being called out to quell conflict on more than one occasion in the 1760s and 1770s.

The company received a royal charter to incorporate as the Carron Company in 1773. However, despite Gascoigne's efforts, the quality of company's products had remained low, and the company's contracts to supply the Royal Navy were cancelled in 1773, with the company's cannon being removed from all naval vessels. A representative of the Royal Artillery, Captain Blair, inspected the Carron Works in 1774 and reported ongoing problems with quality and handling of the guns: "on the death of [Carron Guns partner Ebenezer] Roebuck the Carron Guns had through the carelessness of the workmen very much deteriorated, and the firm lost ground."Despite this negative assessment, the report noted with approval that Charles Gascoigne was attempting to revive the firm.
Gascoigne pushed forward the development of a new type of cannon, originally known as the "Gasconades" but better known by its later name, the "Carronade". It was shorter and much lighter than a long gun of the same calibre, meaning that more could be carried, and it was also quicker to load and required a smaller crew. On the debit side, carronades had a short range.

Some warships - mainly small ones - were equipped with carronades as their main or only armament, but such vessels were vulnerable to opponents armed with long guns. The carronade's principal use was on the upper decks of warships, where batteries of carronades replaced smaller numbers of long guns. This greatly increased firepower at the close ranges at which contemporary naval battles were usually fought, without impairing stability or sailing qualities.

The carronade was a considerable success, and remained in production from 1778 to the 1850s. The company established such a reputation for quality that the Duke of Wellington remarked in a letter to Admiral Berkley in 1812 that he only wanted cannon manufactured by the Carron Company in his army. The company also made ammunition, including some invented by Henry Shrapnel.

The company supplied armaments to governments outside the UK, including weapons supplied to the embryonic United States which were used against Britain in the War of 1812. The British government tried to prevent the company from supplying plans and equipment to the Russian Empire, intended to improve Catherine the Great's weapons foundry at Petrozavodsk; nonetheless, Gascoigne delivered the Russian's orders, and travelled to Russia in May 1786 to supervise the works. 141–144 He remained in Russia for 20 years, dying in July 1806 in Kolpino near St. Petersburg as Actual State Councillor Karl Karlovich Gaskoin.