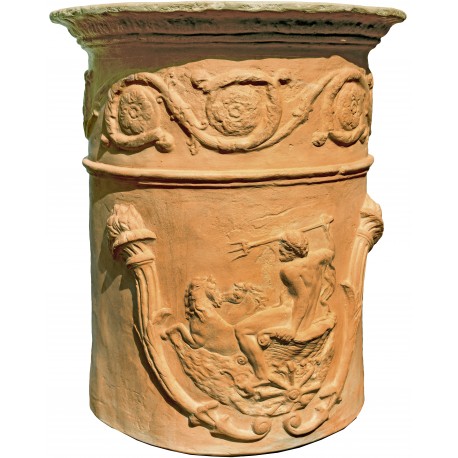 A copy of a cylindrical vase from the Roman era, GREAT MODEL.
Clear terracotta, our exclusive production.
Ornate at the top with double flowered scrolls and at the bottom with a scene of Neptune on a cart drawn by sea horses, and with a trident in his right hand as a symbol of command, all framed by long Cornucopias.

Neptune (Latin: Neptūnus) was the god of freshwater and the sea in Roman religion. He is the counterpart of the Greek god Poseidon. In the Greek-influenced tradition, Neptune was the brother of Jupiter and Pluto; the brothers presided over the realms of Heaven, the earthly world, and the Underworld.
Salacia was his wife.
Depictions of Neptune in Roman mosaics, especially those of North Africa, are influenced by Hellenistic conventions. Neptune was likely associated with fresh water springs before the sea. Like Poseidon, Neptune was worshipped by the Romans also as a god of horses, under the name Neptunus Equester, a patron of horse-racing.
The etymology of Latin Neptunus is unclear and disputed. The ancient grammarian Varro derived the name from nuptus i.e. "covering" (opertio), with a more or less explicit allusion to the nuptiae, "marriage of Heaven and Earth".
Among modern scholars Paul Kretschmer proposed a derivation from IE *neptu- "moist substance". Similarly Raymond Bloch supposed it might be an adjectival form in -no from *nuptu-, meaning "he who is moist". Georges Dumézil though remarked words deriving root *nep- are not attested in IE languages other than Vedic and Avestan. He proposed an etymology that brings together Neptunus with Vedic and Avestan theonyms Apam Napat, Apam Napá and Old Irish theonym Nechtan, all meaning descendant of the waters. By using the comparative approach the Indo-Iranian, Avestan and Irish figures would show common features with the Roman historicised legends about Neptune. Dumézil thence proposed to derive the nouns from IE root *nepot-, "descendant, sister's son".
More recently, in his lectures delivered on various occasions in the 1990s, German scholar Hubert Petersmann proposed an etymology from IE rootstem *nebh- related to clouds and fogs, plus suffix -tu denoting an abstract verbal noun, and adjectival suffix -no which refers to the domain of activity of a person or his prerogatives. IE root *nebh-, having the original meaning of "damp, wet", has given Sanskrit nábhah, Hittite nepis, Latin nubs, nebula, German Nebel, Slavic nebo etc. The concept would be close to that expressed in the name of Greek god Όυράνος (Uranus), derived from IE root *h2wórso-, "to water, irrigate" and *h2worsó-, "the irrigator". This etymology would be more in accord with Varro's.
A different etymology grounded in the legendary history of Latium and Etruria was proposed by Preller and Müller-Deeke: Etruscan Nethunus, Nethuns would be an adjectival form of toponym Nepe(t), Nepete (presently Nepi), town of the ager Faliscus near Falerii. The district was traditionally connected to the cult of the god: Messapus and Halesus, the eponymous hero of Falerii, were believed to be his own sons. Messapus led the Falisci and others to war in the Aeneid. Nepi and Falerii have been famed since antiquity for the excellent quality of the water of their springs, scattered in meadows. Nepet is considered a hydronymic toponym of preIndoeuropean origin widespread in Europe and from an appellative meaning "damp wide valley, plain", cognate with pre-Greek νάπη, "wooded valley".

NEPTUNUS EQUESTRIS
Poseidon was connected to the horse since the earliest times, well before any connection of him with the sea was attested, and may even have originally been conceived under equine form. Such a feature is a reflection of his own chronic, violent, brutal nature as earth-quaker, as well as of the link of the horse with springs, i.e. underground water, and the psychopompous character inherent in this animal.
There is no such direct connection in Rome. Neptune does not show any direct equine character or linkage.
On the other hand, Roman god Consus was associated with horses: his underground altar was located in the valley of the Circus Maximus at the foot of the Palatine, the place of horse races. On the day of his summer festival (August 21), the Consualia aestiva, it was customary to bring horses and mules in procession crowned with flowers and then hold equine races in the Circus. It appears these games had a rustic and archaic character: they marked the end of the yearly agricultural cycle, when harvest was completed. According to tradition this occasion was chosen to enact the abduction of the Sabine (and Latin) women. The episode might bear a reflection of the traditional sexual licence of such occasions. On that day the flamen Quirinalis and the vestal virgins sacrificed on the underground altar of Consus. The fact the two festivals of Consus were followed after an equal interval of four days by the two festivals of Ops (Opeconsivia on August 25 and Opalia on December 19) testifies to the strict relationship between the two deities as both pertaining to agricultural plenty, or in Dumezilian terminology to the third function. In Dumézil's view this fact shows the radically different symbolic value of the horse in the theology of Poseidon