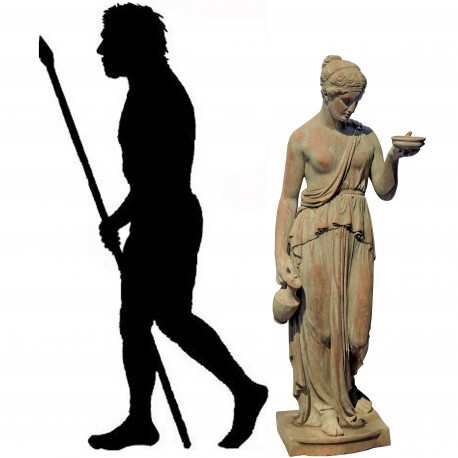 Reproduction 1:1 in terracotta of Thorvaldsen Ebe.

This Hebe was sculpted in white marble by Bertel Thorvaldsen, a Danish sculptor of international fame, who spent most of his life (1789 - 1838) in Italy. The original statue is conserved in Thorvaldsen Museum of Copenhagen. In his time, he was seen as the successor of master sculptor Antonio Canova. His strict adherence to classical norms has tended to estrange modern audiences.
Hebe in ancient Greek religion, is the goddess of youth. She is the daughter of Zeus and Hera.

Bertel Thorvaldsen (Danish pronunciation: [b̥æɐ̯d̥l̩ ˈtˢɒːʋalˀsn̩]; 19 November 1770 – 24 March 1844) was a Danish/Icelandic sculptor of international fame, who spent most of his life (1797–1838) in Italy. Thorvaldsen was born in Copenhagen into a Danish/Icelandic family of humble means, and was accepted to the Royal Danish Academy of Art when he was eleven years old. Working part-time with his father, who was a wood carver, Thorvaldsen won many honors and medals at the academy. He was awarded a stipend to travel to Rome and continue his education.
In Rome, Thorvaldsen quickly made a name for himself as a sculptor. Maintaining a large workshop in the city, he worked in a heroic neo-classicist style. His patrons resided all over Europe.
Upon his return to Denmark in 1838, Thorvaldsen was received as a national hero. The Thorvaldsen Museum was erected to house his works next to Christiansborg Palace. Thorvaldsen is buried within the courtyard of the museum. In his time, he was seen as the successor of master sculptor Antonio Canova. His strict adherence to classical norms has tended to estrange modern audiences. Among his more famous public monuments are the statues of Nicolaus Copernicus and Józef Poniatowski in Warsaw; the statue of Maximilian I in Munich; and the tomb monument of Pope Pius VII, the only work by a non-Catholic in St. Peter's.
Thorvaldsen was born in Copenhagen in 1770 (according to some accounts, in 1768), the son of Gottskálk Þorvaldsson, an Icelander who had settled in Denmark. His father was a wood-carver at a ship yard, where he made decorative carvings for large ships and was the early source of influence on his son Bertel's development as a sculptor and on his choice of career. Thorvaldsen's mother was Karen Dagnes, a Jutlandic peasant girl. His birth certificate and baptismal records have never been found, and the only record is of his confirmation in 1787.[2] Thorvaldsen had claimed descent from Snorri Thorfinnsson, the first European born in America.
Thorvaldsen's childhood in Copenhagen was humble. His father had a drinking habit that slowed his career.[4] Nothing is known of Thorvaldsen's early schooling, and he may have been schooled entirely at home. He never became good at writing, and he never acquired much of the knowledge of fine culture that was expected from an artist.
In 1781, by the help of some friends, eleven-year-old Thorvaldsen was admitted to Copenhagen's Royal Danish Academy of Art (Det Kongelige Danske Kunstakademi) first as a draftsman, and from 1786 at the modeling school. At night he would help his father in the wood carving. Among his professors were Nicolai Abildgaard and Johannes Wiedewelt, who are both likely influences for his later neo-classicist style.
At the Academy he was highly praised for his works and won all the prizes from the small Silver Medal to the large Gold Medal for a relief of St. Peter healing the crippled beggar in 1793. As a consequence, he was granted a Royal stipend, enabling him to complete his studies in Rome. Leaving Copenhagen on August 30 on the frigate Thetis, he landed in Palermo in January 1797 traveled to Naples where he studied for a month before making his entry to Rome on 8 March 1797. Since the date of his birth had never been recorded, he celebrated this day as his "Roman birthday" for the rest of his life.