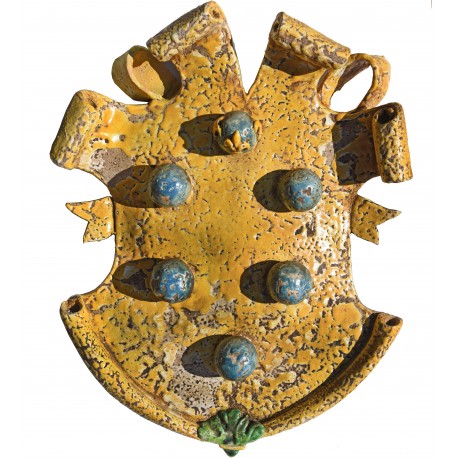 Hand made majolica coat of arms.
Tile replica of one of the many versions of Medici's coat of arms.
Coat of arms hand-formed.
The colors are faithful to the original one, which is found in Florence, Cenacolo of Ognissanti on the facade.

They were affixed to the facades of the farmhouses with the coat of arms of the noble family of the farm. This tradition was in use since the mid-fourteenth century, typical especially of the famous Florentine artist family "Della Robbia".

The House of Medici was an Italian banking family, political dynasty and later royal house that first began to gather prominence under Cosimo de' Medici in the Republic of Florence during the first half of the 15th century. The family originated in the Mugello region of the Tuscan countryside, gradually rising until they were able to fund the Medici Bank. The bank was the largest in Europe during the 15th  century, seeing the Medici gain political power in Florence — though officially they remained citizens rather than monarchs.

The Medici produced three Popes of the Catholic Church—Pope Leo X (1513–1521), Pope Clement VII (1523–1534), and Pope Leo XI (1605);[2] two regent queens of France—Catherine de' Medici (1547–1559) and Marie de' Medici (1600–1610). In 1531, the family became hereditary Dukes of Florence. In 1569, the duchy was elevated to a grand duchy after territorial expansion. They ruled the Grand Duchy of Tuscany from its inception until 1737, with the death of Gian Gastone de' Medici. The grand duchy witnessed degrees of economic growth under the earlier grand dukes, but by the time of Cosimo III de' Medici, Tuscany was fiscally bankrupt.
Their wealth and influence initially derived from the textile trade guided by the guild of the Arte della Lana. Like other families ruling in Italian signorie, the Medicis dominated their city's government, were able to bring Florence under their family's power, and created an environment where art and humanism could flourish. They, along with other families of Italy—such as the Visconti and Sforza of Milan, the Este of Ferrara, and the Gonzaga of Mantua—fostered and inspired the birth of the Italian Renaissance.
The Medici Bank was one of the most prosperous and most respected institutions in Europe. There are some estimates that the Medici family were the wealthiest family in Europe for a time. From this base, they acquired political power initially in Florence and later in wider Italy and Europe. A notable contribution to the profession of accounting was the improvement of the general ledger system through the development of the double-entry bookkeeping system for tracking credits and debits. The Medici family were among the earliest businesses to use the system. Source Wikipedia

SANTI BUGLIONI:
Santi Buglioni, byname of Santi di Michele (1494 - 27 November 1576) was an Italian sculptor, the nephew and collaborator of Benedetto Buglioni.
After Luca della Robbia had moved to France to escape the plague, the Buglioni family inherited from him the secrets of the new pottery glaze techniques. According to Giorgio Vasari, the Buglioni learnt della Robbia's secret through a woman who frequented his house.
Works attributed to Santi Buglioni include the Deposition in the St. Francis Museum of Greve in Chianti, the cyborium in the church of San Silvestro at Convertoie, the pavement of the Biblioteca Laurenziana and of Palazzo Vecchio of Florence. Around 1520-1530 he executed the Noli me tangere at the Bargello and the façade decoration of the Ospedale del Ceppo at Pistoia. From 1539 is the monument to the condottiero Giovanni dalle Bande Nere, together with Niccolò Tribolo, followed by a glazed pottery for the Abbey of Vallombrosa.
Buglioni, who had become blind in his late years, died in 1576 and was buried in the church of Santa Maria Maggiore in Florence. His descendants include Vincenzo Viviani, a disciple and biographer of Galileo Galilei.