Medici coat of arms in stone our production 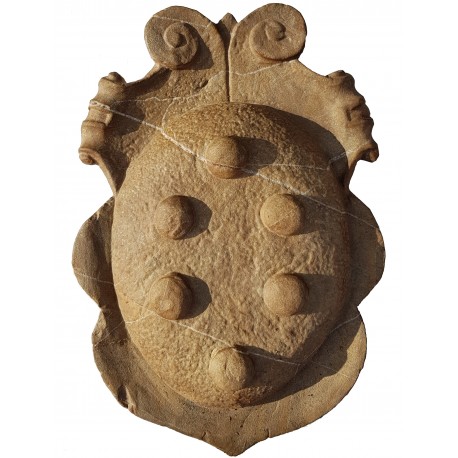 Medici coat of arms in stone our production

Florentine Medici coat of arms of our production in stone.
Coat of arms produced by us in chisel.
It reproduces on request of any size and with any type of stone.

We also have a terracotta version, the shape of this variant was made on the basis of this stone coat of arms # 13663

This specimen is produced in "Pietraforte" of the Cava di Boboli, the stone with which the Medici built in Florence, Palazzo Pitti and Palazzo della Signoria.
The pietraforte (or pietra forte) is a fine-grained sandstone with carbonate cement. It is the typical Florentine building stone, in use, at least since the 11th century, in civil and religious buildings and also for paving.
Appreciated for its opaque brown-brown color but not turned off and for its resistance (hence the name), it has a perpendicular breaking load of about 1400 kg / cm², double compared to pietra serena. When cut in the quarry it has a grayish color, which turns into Havana brown on contact with the air through a chemical reaction of the iron present in the stone.
Sometimes it has bluish gray spots and laminations with spatic calcite veins. It can present a deterioration along the lamination surfaces and have detachments, even substantial ones, along the veins of calcite, but it has a good resistance to atmospheric agents, as demonstrated by buildings built for centuries, even if in the last years the polluting chemical agents have accelerated degradation of the parts left exposed.
In Florence the quarries of pietraforte were located in the Boboli Gardens, therefore very close to the city, and were used well before the construction of Palazzo Pitti. The Palace itself was said to be already underground, because the quarries of material were under its foundations, and that it was enough to "turn it" up high. The Boboli amphitheater is located right in the cavity created to collect the material for the building. A quarry was reopened in Boboli when material was needed to restore and rebuild the ancient towers of Oltrarno after the destruction in 1944.
Other quarries are located on the Costa San Giorgio, in Monteripaldi, alle Campora (quarries that supplied the material for the Santa Maria Novella station), in Riscaggio and in Greve in Chianti (still partially in operation) and generally south of the Arno . Outside the Florentine area there are stones with similar characteristics as Santa Fiora (GR) on the Tolfa Mountains (Civitavecchia) and on the hills of Bergamo.
However, a much older use is documented; in fact in the excavations at Palazzo Vecchio some structures of the Roman theater of Florence emerged, in pietraforte.
The name pietraforte was used by Giorgio Vasari (1546), Agostino del Riccio (1597), Filippo Baldinucci (1681), Giovanni Targioni Tozzetti (1773), etc.


The House of Medici was an Italian banking family, political dynasty and later royal house that first began to gather prominence under Cosimo de' Medici in the Republic of Florence during the first half of the 15th century. The family originated in the Mugello region of Tuscany, gradually rising until they were able to fund the Medici Bank. The bank was the largest in Europe during the 15th century, seeing the Medici gain political power in Florence — though officially they remained citizens rather than monarchs.
The Medici produced three Popes of the Catholic Church: Pope Leo X (1513–1521), Pope Clement VII (1523–1534), and Pope Leo XI (1605); two regent queens of France—Catherine de' Medici (1547–1559) and Marie de' Medici (1600–1610). In 1531, the family became hereditary Dukes of Florence. In 1569, the duchy was elevated to a grand duchy after territorial expansion. The Medicis ruled the Grand Duchy of Tuscany from its inception until 1737, with the death of Gian Gastone de' Medici. The grand duchy witnessed degrees of economic growth under the earlier grand dukes, but by the time of Cosimo III de' Medici, Tuscany was fiscally bankrupt.
The Medicis's wealth and influence initially derived from the textile trade guided by the guild of the Arte della Lana. Like other families ruling in Italian signorie, the Medicis dominated their city's government, were able to bring Florence under their family's power, and created an environment where art and humanism could flourish. They, along with other families of Italy—such as the Visconti and Sforza of Milan, the Este of Ferrara, and the Gonzaga of Mantua—inspired and fostered the birth of the Italian Renaissance.
The Medici Bank was one of the most prosperous and respected institutions in Europe. By some estimates, the Medici family was the wealthiest in Europe for a time. From this base, they acquired political power initially in Florence and later in wider Italy and Europe. They were among the earliest businesses to use the general ledger system of accounting, through the development of the double-entry bookkeeping system for tracking credits and debits.