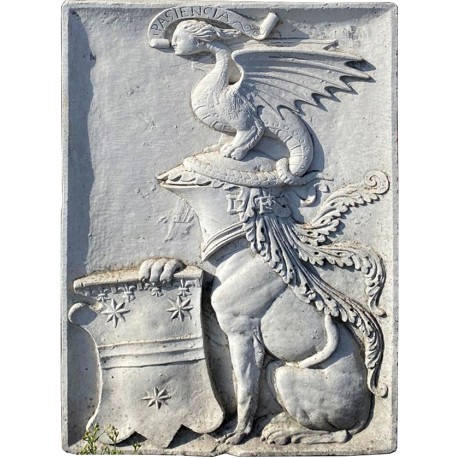 Large concrete coat of arms of the Serristori family of Florence (Figline Valdarno). Averardo da Figline, who was alive in 1178, is considered the progenitor, from whom the notary "ser Ristoro" descends in 1299 from which the family name took root. We make it in white concrete or gray or red on request.

Averardo da Figline, who was alive in 1178, is considered the progenitor, from whom the notary "ser Ristoro" descends in 1299 from which the family name took root, in particular thanks to his namesake, ser Ristoro di Jacopo, who fixed the familiar name and was notary of the Signoria in 1383. His direct grandson was Antonio Serristori, who greatly enriched his family and was gonfalonier of justice in 1443. One of his sons, Giovanni (1419-1494), surpassed the political successes of his father , obtaining the appointments of prior of the Arts, member of the Ten of Balia and finally gonfalonier of justice. During the fifteenth century they obtained the privilege of King Ladislao of Naples to affix the head of Anjou on their family coat of arms. The noble title of counts came with Francesco di Averardo, who was appointed, together with other Florentine patricians, Count Palatine by Leo X on the occasion of his visit to Florence in 1515.

Among these Bartolomeo Serristori was appointed archbishop of Trani in 1551, and Lorenzo (of Averardo) and Lodovico were bishops of Bitetto (1528 and 1552). It was Lorenzo himself who started the construction of the large Serristori palace along the Arno, completed in 1520.

At the time of the anti-Medici struggles against Cosimo I Francesco di Guglielmo and Niccolò di Francesco sided with the republican side, losing all their assets in the city. Despite this, some family branches resisted and remained loyal to the Medici, obtaining wealth and honors during the sixteenth century. In particular, Averardo Serristori was close to the new ruler, so much so that he was chosen as ambassador to Charles V in the delicate mission that asked the emperor to recognize the title of duke to the indirect successor of the murdered Alexander, the return of the Tuscan fortresses, and the future of the widow Margaret of Austria, younger daughter of Charles himself and former wife of Alexander (1537). Eventually Averardo obtained the title and, in part, the fortresses, but not the hand of the widow (for Cosimo), who in fact later married Ottavio Farnese. After this success he was sent ambassador to the new Pius V (1556): the very pope who granted the title of Grand Duke in exchange for a hard fight against heresy in Tuscany, with the painful condemnation of the trusted Pietro Carnesecchi.

In the eighteenth century Anton Maria di Averardo, minister of Pietro Leopoldo, distinguished himself, and in the nineteenth century Luigi Serristori, who had important political positions and in whose palace on the Lungarno that later took his name from them he had the honor of hosting Giuseppe Bonaparte deposed, who died there on July 28, 1844.

A family that still exists today, over the centuries it was the owner of vast estates in the city and in the countryside. Their historic villa, in Figline, was donated for the creation of a hospital: the Serristori hospital is still the main hospital in the upper Valdarno.
Source Wikipedia