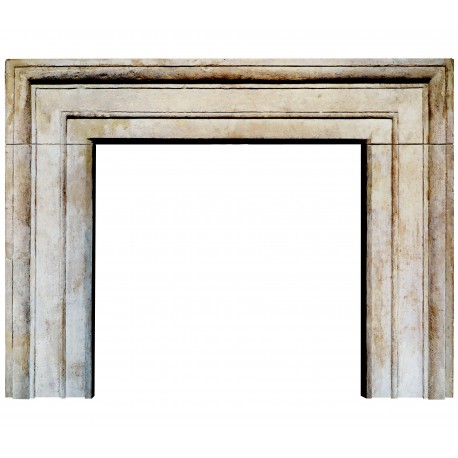 Hand made in ocher limestone.We cam make it in any dimensions.

The profile of this artifact has been detected by the wonderful portals of the Archiginnasio (Bologna).
All doors, internal and external are surrounded by these beautiful molded profiles from the sixteenth century.

The Archiginnasio of Bologna is one of the most important buildings in the city of Bologna; once the main building of the University of Bologna, it currently houses the Archiginnasio Municipal Library and the Anatomical Theatre.
The construction of the Archiginnasio dates back to the 16th century, when Piazza Maggiore was drastically remodeled under papal orders; the Fountain of Neptune was built during this same period. The construction of the Archiginnasio was commissioned by Pope Pius IV through the papal legate Charles Borromeo and the vice-legate Pier Donato Cesi during the years of the Council of Trent, who then entrusted the project to Antonio Morandi (known as il Terribilia). The building was begun at the end of February 1562, built very quickly, it was inaugurated on the 21st of October 1563. The goal of this project was to create a single place where the Schools of the "Legisti" (Canon and Civil law) and "Artisti" (philosophy, medicine, mathematics, natural sciences and physics), previously located in various places across the town, could be hosted together. The building of the new "Schools" was named Archiginnasio after the classical term which was used to designate the Studium, as the University was first called, of Bologna.
The Archiginnasio ceased from being a University in 1803 when the University was moved to Palazzo Poggi where it is still located today. Scuole Pie (primary schools) where housed in this building for a few years and later, from 1838 onwards, were replaced by the city library. Archiginnasio Municipal Library is the largest library in Emilia-Romagna. It was first established to keep the books collected from the closure of the religious orders made by Napoleon. At present it boasts 850,000 volumes and pamphlets, including 2,000 incunabula, about 15,000 16th century editions, 8,500 manuscripts, letters, collections of autographs, prints and drawings, and 250 archives. All of this material, handwritten and printed collections, are of the utmost importance. They deal with the civil, cultural, religious and social history of Bologna and its territory.
Upon entering, visitors are asked to hand over all bags and writing materials which can be picked up when leaving.