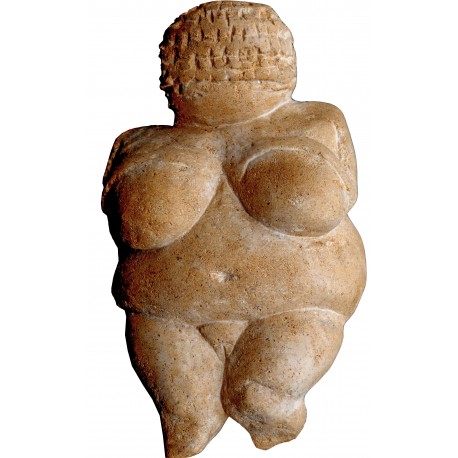 Sculpted by Philippe Deleinsegne in 2005.

The Venus of Willendorf is an 11.1-centimetre-high (4.4 in) statuette of a female figure estimated to have been made between about 28,000 and 25,000 BCE. It was found in 1908 by a workman named Johann Veran or Josef Veram during excavations conducted by archaeologists Josef Szombathy, Hugo Obermaier and Josef Bayer at a paleolithic site near Willendorf, a village in Lower Austria near the town of Krems. It is carved from an oolitic limestone that is not local to the area, and tinted with red ochre. The figurine is now in the Naturhistorisches Museum in Vienna, Austria.
Several similar statuettes and other forms of art have been discovered, and they are collectively referred to as Venus figurines, although they pre-date the mythological figure of Venus by millennia.
After a wide variety of proposed dates, following a revised analysis of the stratigraphy of its site in 1990, the figure was estimated to have been carved 24,000–22,000 BCE,[4] but more recent estimates have pushed the date back "slightly" to between about 28,000 and 25,000 BCE.
It is believed that the figure was carved during the Paleolithic Period, also known as the "Old Stone Age". This period of Prehistory started around 30,000 BCE.[5]
Very little is known about its origin, method of creation, or cultural significance; however, it is one of numerous Venus figurines or representations of female figures surviving from the Paleolithic period.
The purpose of the carving is the subject of much speculation. Like many figurines, it probably never had feet and would not have stood on its own, though it might have been pegged into soft ground. Parts of the body associated with fertility and childbearing have been emphasized, leading researchers to believe Venus of Willendorf may have been used as a fertility goddess.[7] The figure has no visible face, her head being covered with circular horizontal bands of what might be rows of plaited hair or a type of headdress.
The nickname, urging a comparison to the classical image of "Venus", is now controversial. According to Christopher Witcombe, "the ironic identification of these figurines as 'Venus' pleasantly satisfied certain assumptions at the time about the primitive, about women, and about taste".[9] Catherine McCoid and LeRoy McDermott hypothesised that the figurines may have been created as self-portraits by women. They speculated that the complete lack of facial features could be accounted for by the fact that sculptors did not own mirrors, though Michael S. Bisson responded that water pools and puddles served as readily available natural mirrors for Paleolithic humans.

28 other products in the same category: