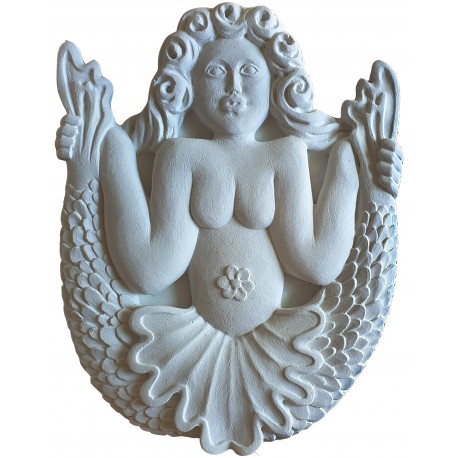 Hand made by us in plaster-cast.

Reproduction of the two-tailed Mermaid, called Melusine, of Spinete, South of Italy in white Carrara marble ~ This creature is associated with numerous stories and legends, and is imbued with symbolic meaning in alchemy. Depicted with either one or two tails, it is the latter creature, the so-called Sirena bicaudata, that conforms to the birth-giving Mother Earth template. The connection to pregnancy is underlined by the bulging female abdomen that often features in the representations. The two tails, which are usually shown folded back towards the mermaid’s head, are transformations of the legs of the earth goddess which are spread either in coitus or in childbirth. The same dual-nature symbolism is also at work in alchemy, which employs the siren as a more benevolent emblem of enlightenment: the siren of the philosophers. Alchemically, the siren’s two tails represent unity, of earth and water, body and soul, and the vision of Universal Mercury, the all-pervading anima mundi that calls out and makes the philosopher yearn to her.

14 other products in the same category: