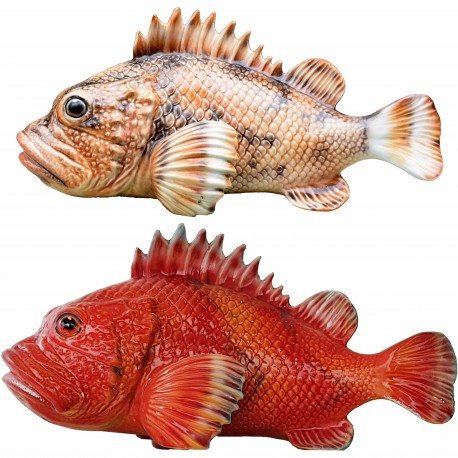 Realization of a round red Scorpion in Majolica, we have it in two versions, red and brown.
The red scorpionfish in the Mediterranean occupies the circalittal area (coralligenous) 40/150 m deep.
The brown scorpionfish in the Mediterranean occupies the benthic zone that goes from 0 to 100 m of depth.
Both are fish belonging to the Scorpaenidae family.

(Scorpaena scrofa Linnaeus, 1758)
Scorpaena scrofa is the largest eastern Atlantic scorpion fish. Colouration ranges from brick-red to a light pink, and it has dark coloured blotches on its body. It has venomous spines, can achieve a maximum weight of approximately 3 kilograms (6.6 lb). It can grow to a maximum length of 50 centimetres (20 in), but is commonly around 30 cm (12 in).
It has 12 dorsal spines, 9 dorsal soft rays, 3 anal spines, and 5 soft rays. It often has a dark spot on its spinous dorsal spines between the 6th and 11th.[4][5] It has long supraorbital tentacles.
This species is found in the Mediterranean Sea. It is also found in the Eastern Atlantic Ocean around the British Isles, where rare, south to Senegal, the Canary Islands, and Cape Verde.

(Scorpaena porcus Linnaeus, 1758)
Scorpaena porcus, commonly known as black scorpion or brown scorpionfish.
The black scorpionfish is widespread in the Eastern Atlantic (from the British archipelago to the Moroccan coast, including the Azores and the Canaries), in the Mediterranean (more widespread in the western part) and in the Black Sea. Benthic fish, camouflaged, lives from 0 to over -100 meters of depth on rocky bottoms or meadows of posidonia.