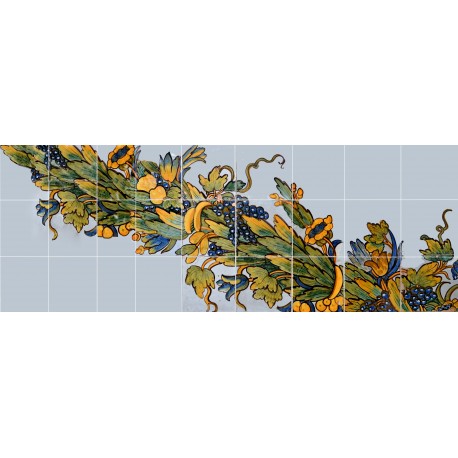 Panel made with 27 tiles of cm.20x20.
Reproduction of the vine shoots of the famous "Chiostro Maiolicato di Santa Chiara" in Naples (see attached photos).
Stupendous example of Neapolitan creativity.
On request we can make it in any dimensions.

The majolica cloister, or of the Poor Clares, is a work of 1739 by Domenico Antonio Vaccaro when a radical artistic change began that involved the whole monastic complex. Escaped from the bombing of Naples during the Second World War, it is one of the baroque testimonies of the basilica.
The Monumental Complex of St. Chiara, including the Church, the Monastery and the Convent, had been raised since 1310 to 1328 by the will of the King Roberto d’Angiò and his wife Sancia of Majorca. The sovereigns, both devoted to St. Francis of Assisi and St. Chiara, wanted to build a Franciscan citadel that housed in the Convent the Clarisses and in the contiguous Monastery the Friars Minor. The Church, central nucleus of the whole complex, rose with the title of Saint Host or Sacred Body of Christ, dedication suggested by the Eucharistic Miracle of Bolsena, happened in 1264; the denomination changed immediately in Santa Chiara, probably for the extraordinary number of Clarisses introduces in the Convent.

Domenico Antonio Vaccaro (Naples, 3 June 1678 - Naples, 13 June 1745) was an Italian painter, sculptor, architect and designer. He was an artist between the Baroque and Rococo and the author of important Neapolitan churches.
Son of the sculptor Lorenzo Vaccaro and Caterina Bottigliero.
In 1729 the payments made to the master maker Giovanni Azzolini date back to the works carried out in the cloisters of the Basilica of Santa Chiara.