Large Coat of Arms of House of Savoy 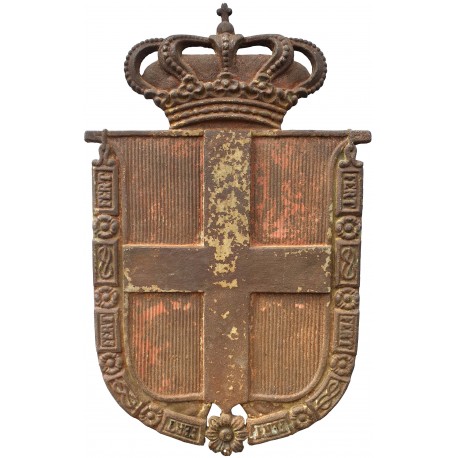 Large Coat of Arms of House of Savoy

Coat of arms of the Kingdom of Italy in cast-iron. Well evident the collar badge of the Order of the Most Holy Annunciation and the acronym FERT, the motto of the royal house of Savoy-Sardinia and Italy, the House of Savoy.

FERT (sometimes tripled, FERT, FERT, FERT), the motto of the royal house of Savoy-Sardinia and Italy, the House of Savoy, was adopted by King Vittorio Amedeo II (1666–1732).

It appeared for the first time on the collar of the Supreme Order of the Most Holy Annunciation, or Ordine Supremo della Santissima Annunziata, the primary dynastic order of the kingdom. This ceased to be a national order when Italy became a republic in 1946. The order remains under the jurisdiction of the head of the House of Savoy, however, as hereditary Sovereign and Grand Master.

The meaning of the letters has been a matter of some controversy, to which a number of interpretations have been offered. The motto is believed an acronym of:

Foedere et Religione Tenemur (Latin: "We are bound by treaty and by religion");
Fortitudo Eius Rhodum Tenuit (Latin: "His strength conquered Rhodes" or "By his bravery he held [or occupied] Rhodes"), referring to the victory of Amadeus V, Count of Savoy (1249–1323), who fought against the Saracens at the 1315 siege of Rhodes; or either

Fortitudo Eius Rempublicam Tenet (Latin: "His bravery [or strength] preserves [or defends] the state"); or
Fides Est Regni Tutela (Latin: "Faith is the protector of [our] Kingdom").

It has also been suggested that the letters are actually the Latin word fert (third-person singular present active indicative of ferre), meaning "[he/she/it] suffers/bears", possibly referring to Jesus bearing the sins of the world.

A parody of FERT was said by Savoy's neighbors to mean Frappez Entrez Rappez Tout ("Strike, Enter, Break Everything"), from their penchant for chevauchée.