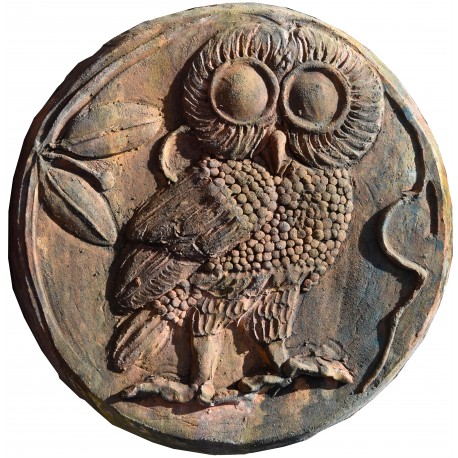 Hand made by US. HAND MADE FORMED.
This roundel is part of a series of roundels inspired by the wonderful ancient Greek coins.
(Bas-relief sculpture on a piece of round stone.)
Freely reproduced by Athens silver Tetradramma 510 b.C.

The tetradrachm was an Ancient Greek silver coin equivalent to four drachmae. In Athens it replaced the earlier "heraldic" type of didrachms and it was in wide circulation from c. 510 to c. 38 BC.
The transition from didrachms to tetradrachms occurred during c. 525–510 BC; the abandonment of the "heraldic"-type didrachms and the Archaic tetradrachms (early "owls") of the polis of Athens apparently took place shortly after the Battle of Salamis, 480 BC. This transition is supported by the discovery of contemporary coin hoards, and more particularly of a coin hoard found on the Acropolis in 1886.
The Athenian tetradrachm was widely used in transactions throughout the ancient Greek world, including in cities politically unfriendly to Athens.[2] Athens had silver mines in state ownership, which provided the bullion. Most well known were the silver mines of Laurium at a close distance from Athens. The Athenian tetradrachm was stamped with the head of Athena on the obverse, and on the reverse the image of the owl of Athena, the iconographic symbol of the Athenian polis, with a sprig of olive and a crescent for the moon. According to Philochorus, it was known as glaux (γλαύξ, little owl) throughout the ancient world[6] and "owl" in present-day numismatics. The design was kept essentially unchanged for over two centuries, by which time it had become stylistically archaic. To differentiate their currency from the rival coinage of Aegina using the Aeginetic stater of about 12.3 grams, Athens minted its tetradrachm based on the "Attic" standard of 4.3 grams per drachma. The vast number of "owls-tetradrachms" available those days mainly from the silver mines of Laurium financed the several achievements of Athens, such as the reconstruction of the Acropolis and building the Parthenon, as well as many wars, including the Peloponnesian War.
The tetradrachm's use as a currency was soon adopted by many other city-states of the ancient Greece, Asia Minor, Magna Grecia and other Greek colonial cities throughout the Mediterranean Sea. With the armies of Alexander the Great it spread to the Greek-influenced areas of present-day Iran and India. Source Wikipedia.