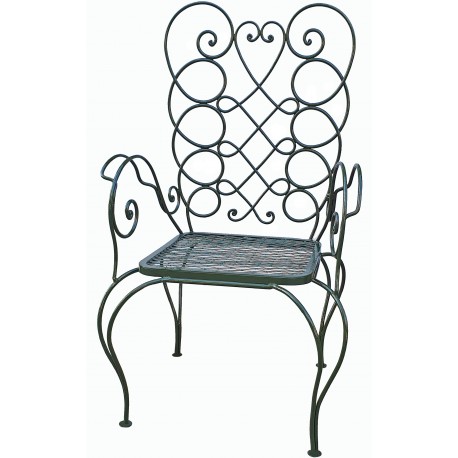 DECO arm-chair of the early twentieth century, visible in Villa Necchi Campiglio (Milan), owned by FAI.
The Villa was built on a project by the famous architect Piero PORTALUPPI.
The chairs were deisgned by Tomaso Buzzi (Sondrio, 30/9/1900 - Rapallo, 16/2/1981).

We have also the table see (round table), see below link:
Round table

Villa Necchi is a splendid historic residence that is part of the Milano house museum circuit.
The property was donated to the FAI by the Necchi sisters and since 2008 has been open to the public.

Tomaso Buzzi (Sondrio, 30 September 1900 - Rapallo, 16 February 1981) was an Italian architect, designer and interior designer.
After graduating in architecture from the then Royal Technical Institute, now the Polytechnic of Milan, he joined the association for the diffusion in the house of modern figurative arts "Il Labirinto" with Paolo Venini, Gio Ponti, Carla Visconti in 1927. of Modrone, Emilio Lancia and Pietro Chiesa.
During the 1920s and 1930s, especially in the context of the Deco affair, Buzzi was a well-known designer, one of the favorite architects of the most exclusive Milanese bourgeoisie.
Between 1932 and 1934, Tomaso Buzzi became artistic director of Venini & C., for which he designed a series of vases with classic shapes, obtained through the elaboration of traditional techniques.
Collaborator of Gio Ponti, he contributed in organizing various national and international artistic events, including the Milan Triennale and the National Sports Exhibition.
In the immediate post-war period, voluntarily reduced his professional commitments, he purchased in Umbria, in the province of Terni, La Scarzuola, an ancient Franciscan convent with annexed land, which he transformed into his own residence, realizing what had constituted the dream of his life, or a fantastic architectural complex of strong esoteric values, halfway between the park and the sapiential Acropolis, with eloquent titles: the Boat of Souls, the Stone Whale, the Tower of Despair, the Ladder of Life, the Temple of Eros, the well of meditation, the bee theater, the termite mound.
Buzzi devoted himself to Scarzuola from 1958 to 1971, leaving the singular project interrupted.
Source: wikipedia