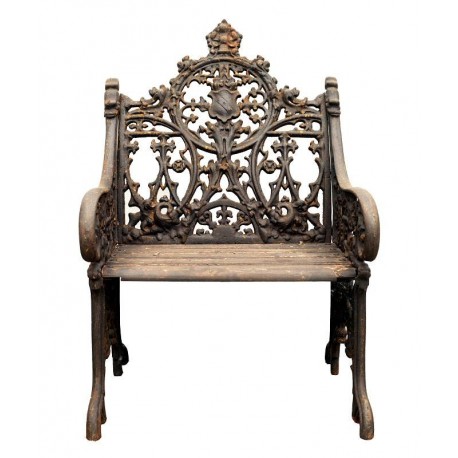 Cast iron and wood.
Stunning replica of a 19th century English bench.
Some original pieces are in the Vatican Gardens in Rome.
There are examples in the Museum of Italian Cast iron in Longiano.
3-piece casting.
Material: Cast iron and Teack wood.
Coalbrookdale company - Gothic pattern - (Pattern No 22)

The bench was designed in the 18th century by Coalbrookedale Company, neo-Gothic style.

Abraham Darby, in his later life called Abraham Darby the Elder, now sometimes known for convenience as Abraham Darby I (14 April 1678 – 8 March 1717) was the first and best known of several men of that name. Born into an English Quaker family that played an important role in the Industrial Revolution, Darby developed a method of producing pig iron in a blast furnace fuelled by coke rather than charcoal. This was a major step forward in the production of iron as a raw material for the Industrial Revolution.
Darby leased the furnace in September 1708, and set to work preparing to get it into blast. His first account book, running from 20 October 1708 to 4 January 1710 survives. This shows the production of 'charked' coal in January 1709 and the furnace was brought into blast on 10 January. Darby sold 81 tons of iron goods that year.

The furnace was used for the first time on 10 January 1709 and the blast appears to have been successful. Darby was probably helped by the fact that the Shropshire 'clod coal' that he was using was fairly sulphur-free. However, experimentation with different fuels continued for some time; for example cargoes of coal were brought up the Severn from Bristol and Neath. Some of the molten iron from the blast was run into pigs and sent down the Severn for use in Bristol foundries, but much of it was used to cast pots and other cast iron goods.
The reasons why the iron produced by Darby was not used in forges to make wrought iron have been much debated. The reason may be partly that his pig iron was better for castings than charcoal pig iron, but the presence of silicon as an impurity made it an unattractive feedstock for finery forges. However recent work has thrown doubt on this explanation, which is based on data from the 1720s when the Coalbrookdale Company operated a forge: the forge could hardly even make a profit with charcoal pit iron.
The business was partly financed by a loan from Thomas Goldney II of Bristol and by Graffin Prankard and James Peters becoming partners. Later John Chamberlayne became a partner, and Darby's brother-in-law Thomas Baylies a manager.

Coalbrookdale by Night is an 1801 oil painting by Philip James de Loutherbourg.
The painting depicts the Madeley Wood (or Bedlam) Furnaces, which belonged to the Coalbrookdale Company from 1776 to 1796. The picture has come to symbolize the birth of the Industrial Revolution in the Ironbridge Gorge, Shropshire, England. It is held in the collections of the Science Museum in London.
Loutherbourg undertook tours of England and Wales during 1786 and 1800, observing industrial activity at the time. Coalbrookdale by Night provides a view of the Bedlam Furnaces in Madeley Dale, downstream along the River Severn from the town of Ironbridge itself.