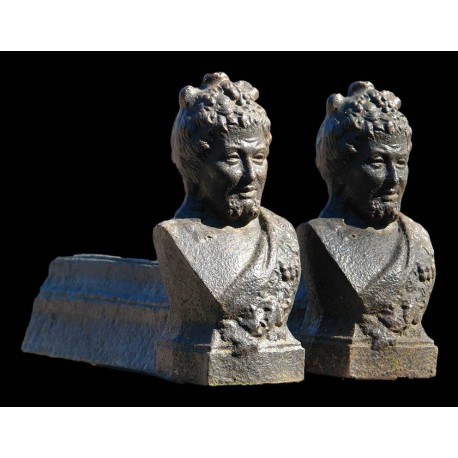 an (Greek Πάν, genitive Πανός), in Greek religion and mythology, is the god of shepherds and flocks, of mountain wilds, hunting and rustic music. His name originates from the word paein, meaning to pasture. He has the hindquarters, legs, and horns of a goat, in the same manner as a faun or satyr. He is recognized as the god of fields, groves, and wooded glens; because of this, Pan is connected to fertility and the season of spring.

In Roman mythology, Pan's counterpart was Faunus, a nature spirit who was the father of Bona Dea (Fauna). In the 18th and 19th centuries, Pan became a significant figure in the romanticist movement of western Europe, and also in the 20th century Neopagan movement.[1]

The parentage of Pan is unclear; in some myths he is the son of Zeus, though generally he is the son of Hermes, with whom his mother is said to be a nymph, sometimes Dryope or, in Nonnus, Dionysiaca (14.92), a Penelope of Mantineia in Arcadia.[2] His nature and name are alluring,[clarification needed] particularly since, following Plato's inventive etymology,[3] his name is sometimes mistakenly thought to be identical to the Greek word pan, meaning "all", when in fact the name of the god is derived from the word pa-on.[citation needed], which means "herdsman" and shares its prefix with the modern English word "pasture". In the Mystery cults of the highly syncretic Hellenistic era[4] Pan is made cognate with Phanes/Protogonos, Zeus, Dionysus and Eros.[5]

Probably the beginning of the linguistic misunderstanding is the Homeric Hymn to Pan, which describes him as delighting all the gods, and thus getting his name.[citation needed] The Roman Faunus, a god of Indo-European origin, was equated with Pan. However, accounts of Pan's genealogy are so varied that it must lie buried deep in mythic time. Like other nature spirits, Pan appears to be older than the Olympians, if it is true that he gave Artemis her hunting dogs and taught the secret of prophecy to Apollo. Pan might be multiplied as the Panes (Burkert 1985, III.3.2; Ruck and Staples 1994 p 132[6]) or the Paniskoi. Kerenyi (1951 p 174) notes from scholia that Aeschylus in Rhesus distinguished between two Pans, one the son of Zeus and twin of Arcas, and one a son of Kronos. "In the retinue of Dionysos, or in depictions of wild landscapes, there appeared not only a great Pan, but also little Pans, Paniskoi, who played the same part as the Satyrs".

The worship of Pan began in Arcadia, and Arcadia was always the principal seat of his worship. Arcadia was a district of mountain people whom other Greeks disdained. Arcadian hunters used to scourge the statue of the god if they had been d